Virtual Switches in Ezlo, yes you can

I just discovered today Ezlo has Virtual Switch supported natively without a plug in. I used them extensively with Vera and was disappointed they weren’t in Ezlo. But they are!

Its a little cryptic to create one but easy enough.

Just follow the first part only of this link to create the virtual switch. Ignore the portions about linking it to house modes.

Vera house modes are collections of device settings that let you quickly set the status of a range of devices with a single click. Your controller is always in one of four modes – Home, Away, Night or Vacation: This tutorial shows you how to create...

Then go into Ezlo, then devices and rename the new switch created to the name you want to call it. Now you can create a scene that triggers off of the virtual switch. As I often do the virtual switch triggers the scene then after a delay I reset the virtual switch back to false for next time… but that depends on your application and required logic.

The virtual switch just shows up as another device in your list of devices, very similar to the Virtual switch plug in on Vera.

Add virtual switches coupled with the much more capable AND, OR and NOT logic in meshbots and scenes are more powerful and easier to create. I had a lot of LUA code stubs in Vera scenes I won’t need now due to the AND logic for triggers.

Thats great to hear you like the new Ezlo Virtual Switches.

But please do tell us how we can improve them or if there are additional features/capabilities you would want.

Well since you asked

… I think a lot of people use virtual switches once they get their feet wet in more complex scenes.

It would be nice if you could just add a virtual switch like you pair a new zwave device. Instead of pairing an external switch just add another option to add a virtual switch. This would eliminate the cryptic command line code pasting to a console screen. Since you are clear you are want to make a more powerful platform without needing to be a professional C-Code/Linux engineer then making the creation of virtual switches native in the UI would be a nice enhancement. CLI commands gives the illusion of needing to be an expert in software to use the platform even if it is straight forward as in this case.

Just thinking of ways to break down user entry barriers.

As an FYI, you can also create other types of virtual devices apart from switches. Just replace ‘plug_interior’ in the code with any of the ‘Supported device types’ listed on this page - https://developer.mios.com/api/hub/plugins/test-plugins/public-scripts/scripts-generate_devices/

Yes I saw that is the listing. I can’t quite wrap my head around what a virtual dimmer switch is or a virtual door lock. I use the virtual switch (on/off) basically as a boolean true false memory storage point. I couldn’t figure out how to do this with Global variables. So its probably overkill to use a device for binary storage but it allows you to trigger off of it, set or reset it in an action, or set or reset it via the iPhone interface. So it is quite helpful.

When you are in the device screen and press the + button in the top right it pulls us the screen below. If you could just add one additional category. Add a virtual on/off switch. That’s it. Basically it does the same as when do when you paste in the code to the command interface today (on your house modes example page) to create the virtual switch.

Then the user can go rename the switch to something of their liking and use it in triggers and actions to their hearts content. 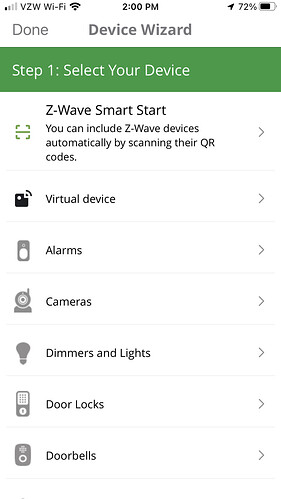 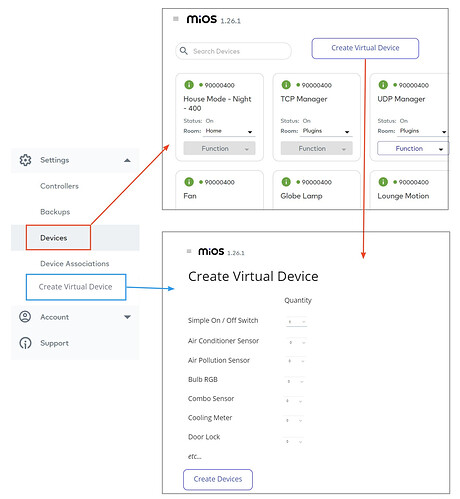 Theres been a how to guide on the forum for years

How to - Create virtual devices on Ezlo platform General Discussions

We can now create some virtual devices on the Ezlo Plus / Secure and Vera Edge running Ezlo firmware. [Screenshot_20200909_094233] There are two methods you can use to install the Virtual Devices plugin. Method 1 - Using SSH You need to SSH in to your Ezlo controller using Putty or some other SSH client and run these two commands first: The uername is: root and the password is on the sticker underneath the controller. [image] opkg update opkg install firmware-plugins-test_plugin OR Me…

Something like that for adding “Standard” virtual devices, via the web UI, has been a feature request for some time now.

I am one who would certainly use a virtual switch - if it were available from a drop down menu as suggested. I have to believe there are many users like me who use devices and scenarios but can’t or don’t want to get into the coding. As soon as I see a suggestion like “just cut and paste this code…” I bail out. Having tried other fixes and functionalities requiring this method, I can say that without fail it has resulted in some mess I can’t undo. No more of that. Just give me a button or drop down.

have you tried the new “Virtual Container” concept we have…? 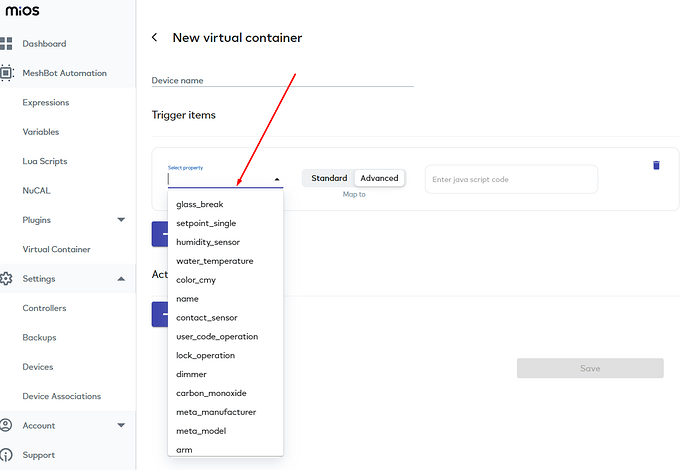 I created all this by simply clicking…

Nope. I don’t have a clue where that can be found. Doesn’t look anything like my menu list.

here…its the new web interface we have for Ezlo.

I appreciate that you’re trying to help me, but I really don’t know what to do with the info provided. New web interface? Didn’t know there was an old one. I use my Ezlo Secure via app because I was told that’s the only way to talk to it. Anyway, I tried clicking on your link, tried “new account”, and got some prefilled boxes that didn’t allow me to do anything. Pretty much like my Ezlo.

You would need to access it with the same credentials you use on the app:

If you are already using your Vera/Ezlo account to manage controllers and devices then you just need to login at http://ezlogic.mios.com. The dashboard will show all devices connected to your account so you can begin using the interface immediately.

Ezlogic.mios.com is a web interface to your Ezlo device as an alternative to using a tiny cell phone. I recommend using it as it is a much easier way to edit scenes than the smart phone plus you get more capabilities.

If you know what a virtual switch is and have used them then by default you’re beyond a beginner. I agree pasting code to create a virtual switch is cumbersome but right now it’s either that or no virtual switch. The instructions earlier on in this thread are pretty foolproof and once the vzw itch is created you can name it whatever you like and trigger off of it in your scenes…

OK, now I’ve entered this ezlogic.mios website. Although I do consider myself beyond “beginner” as I have struggled with Vera and now Ezlo for more than 5 years, I doubt I could define virtual switch. Regardless, as I look at this site I don’t see anything that I know how to use. Even when I go to the Device tab, there seems nothing helpful in regards to controlling the devices. No where do I see anything about scenes. Yes, the view I have is larger but how does that help me? I’m just an old guy (70+) trying to control lights and doors. My Vera Plus did that just fine then Vera scared me into switching to Ezlo by saying Vera was no longer supported. Since then it’s been a battle to do even basic things reliably. So far all feedback from you guys seems directed at a programmer. It’s not helping.

Virtual Container is not the same thing as a traditional “standard” virtual device.

Virtual Container appears you have to select some properties of an existing real device(s).

The only way to create standard virtual devices is via the Online API Tool and SSH command to install the virtual device plugin in the first instance.

@melih maybe the devs can add the plugin into the marketplace for easier initial installation?

And as we have already discussed before on the forum, it would be nice to have an area in the web GUI for creating these standard virtual devices, rather than issuing code commands to the Online API Tool site.

And maybe someone from Ezlo support can connect to his hub and create the virtual devices he needs for him, as he is struggling.

Even when I go to the Device tab, there seems nothing helpful in regards to controlling the devices

In the new Ezlo web user interface under Settings → Devices you cannot control your devices from this area, instead go to the Dashboard menu item.

No where do I see anything about scenes.

Scenes are now called “Meshbots” go to that menu item you can create a new “local” rule (scene).

My Vera Plus did that just fine then Vera scared me into switching to Ezlo by saying Vera was no longer supported.

That is not true. The older Vera hubs are still being supported by the new Ezlo company.

They are just no longer being actively developed and improved in anyway. But still continue to work and function as they always did.

And the new Ezlo line of hubs will replace them eventually.

However I still run my old Vera Plus as my main controller for my house.