Added “any” values. Also we improve performance for Local Meshbot and Vidoo node.

You can specify camera and it’s hotzone:

We added Object and Face detection as a Trigger:

3. NuCAL (Services) as an Action
Now you can enroll to the service (we are going to provide more services soon) and use it as an Action.
Let’s see how to use Google Sheets.
To create a spreadsheet using MeshBot you should do the following:
Go to Local MeshBot page

Another example, if you want to add a worksheet to existing spreadsheet you should do the following:

One step closer! Interestingly, all(?) my devices from my Vera Plus are now showing up in the dashboard - although they aren’t updating with the correct status. Not sure what’s going on there. My first thought was that it was the voi_control NuCAL integration partially working, such that the devices that Alexa could see were showing up…but then I realized that a WiFi device that is only on alexa wasn’t showing up, so maybe voi_control has nothing to do with it? Dunno

Seems to be down for me:

You don’t have permission to access / on this server.

It’s back up now.

Same for me I can see all my devices from my Vera Plus now in the Dynamic Dashboard.

And use existing Lua Scripts:

Great it seems to be working OK for me.

We just need some good examples now of “Ezlo” Lua scripts, as we can’t just copy and paste our existing Lua scripts from Vera firmware hubs.

You said the devices on the dashboard from your Vera firmware hub aren’t updating status.

However can you actually control any of those Vera devices via the dashboard tiles?

can you actually control any of those Vera devices via the dashboard tiles?

Apparently not. The controls change, but (for example) the light doesn’t actually turn on.

Also, all my DSC plugin devices show up as motion sensors. Which I could probably work with, that is if they actually worked…

All of these new device tiles that have appeared from Vera firmware hubs are dead for me, no control and no status feedback.

It has also imported some Vera firmware 3rd party plugin devices but not all of them. I can now see some tiles on the dashboard relating to the following Vera plugins, Harmony, WOL with Ping, MSW Weather, RGBW Controller etc.

Also no Vera firmware hubs appear in the dashboard filters in the Controllers section. I think this was possibly unintended for these devices to appear at this time. This has happened before also in the past, where devices from Vera firmware hubs were visible on the Ezlo Dynamic Dashboard.

Ideally in the longer term we would like for devices from Vera firmware hubs to appear into the Ezlo system, in to the dashboard and into meshbot rules etc. I could then stop using Rene’s bridge plugin and not bridge over any devices and instead allow their system to natively make them appear.

However I would have two feature requests if this is to happen with official support.

You can probably use Rene’s Vera to Ezlo Bridge plugin here, to get your DSC devices from your Vera controller into the Ezlo system and they will work that way.

I for example have AltHue Vera plugin devices (Philips Hue Lights) on my Ezlo Plus and they work via the bridge plugin.

We are not supporting Vera devices for now. As you stated you can use bridge plugin. The devices showing is a bug I see

Thanks for confirming that’s what I thought. Hopefully in the future then support for devices still paired to Vera firmware hubs to be presented into the Ezlo system.

You can probably use Rene’s Vera to Ezlo Bridge plugin here, to get your DSC devices from your Vera controller into the Ezlo system and they will work that way.

Yeah, probably, but I’m trying to avoid “band-aid” fixes (even good ones!) in favor of keeping my Ezlo installation as “pure” as possible (though I did cave and install MSR recently…) until such a time as I can move over 100%. From what I’ve seen/heard, I’m hopeful that the Ezlo team will be able to get at least a Beta version of the DSC plugin out in the next month or two, which I think will be the tipping point for me. We’ll see

Well I can recommend the bridge plugin it works well for me. Good to have options.

I just had an idea:

Is it possible to combine several thermostats into one virtual one, so that one controls all radiators with one virtual controller?

Is it possible to combine several thermostats into one virtual one, so that one controls all radiators with one virtual controller?

have you tried the Virtual Container capability in EZLogic? (you can create a Virtual device and link it to properties of as many devices as you want).

I’m not sure how the Virtual Container is configured. But It seems like I can realize something like

But what I want is to create a viritual thermostat in the Dashboard that controls a group of thermostats. Something like this: 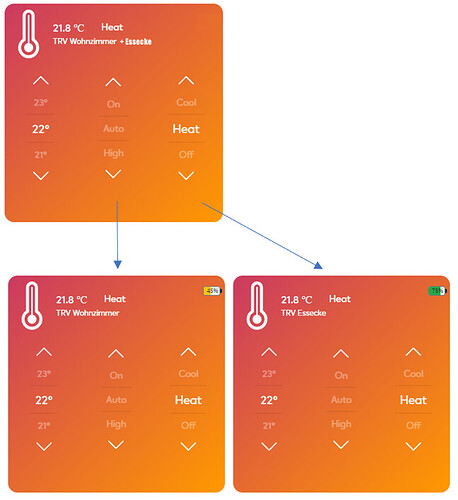