In our Ezlo Platform we are ofcourse not forgetting also 2Gig devices. Here you can see our current progress and our short term plan for how to integrate them.

We will be updating this post after each release. 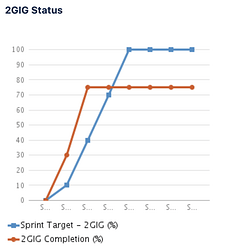 You can see the %age coverage of 2Gig devices in visual format and how we make progress for each release. “S” above means “Sprint” which is a development cycle.

Wait, what? I didn’t know 2 Gig was a go-forward for Elzo. Is this just for the VeraSecure (which I have) or is 2 Gig being built into future controllers?

2 Gig being built into future controllers?

already done! New Ezlo Controllers have it and the list of supported devices are in the original post

Awesome! But I sure hope more supported devices are coming. I use three 2 Gig models on the VeraSecure under UI7, and so far none are on the Elzo Platform list.

Now if we can just get the EnOcean plug-in ported to Elzo, I can move to Elzo without losing any of my UI7 primary technologies. There isn’t a competing system that I know of which would support all of these technologies.

VeraLink (AKA 2 Gig) is 433 Mhz in the the EU, but this doesn’t mean generic 433 Mhz devices, just the specific devices supported. If you want generic 433 Mhz, you would want to look at the RFXtrx controller plug-in.

Please put every device you want us to support in the wish list post we created, we will be happy to oblige and keep you informed about its progress.

I Know . But having all 433mhz device native in ezlo feens like a mission impossible. Better then to have the rfxtrx native and problem solved. In my Vera plus i have a rfxtrx… This 2gig is one of 10000 433 brands…

@melih , Hmmm, sounds like a smart solution but I assume it integrates via VOI? That would make it cloud dependent, isn’t it? (Hopefully I’m wrong)

VOI is a smart solution but if possible I prefer a local radio for 433Mhz devices. I think many users have the RFXcom radio with the plug-in.

we have two phases…
phase 1…Virtual Devices cloud dependent
phase 2…Virtual Devices local (for things that can be local). So lets say you are using Broadlink IR/RF device, we will be, at phase 2, integrating with this device to work locally. So anything you create as a “Virtual Device” will work locally if the integration is done locally.

Our design philosophy is to architect it to work locally if it can be done.

@Melih, Thanks, that is good news. I will add my 433 MHz devices to the wish list.

@Melih, From what I read the 2Gig support will only be on the Ezlo Plus Plus, correct?

So Ezlo Plus Plus is now called Ezlo Secure? Very confusing how you name your new devices and also extremely original

It seems that there is a bug with the 2GIG-DW204-345 contact sensors on the Ezlo Secure.
The sensor is listed in the device list and pretends to pair with the system but does not actually pair.
The contact sensor does not report open/closed contact.
I have been told that the Ezlo engineers are currently working on this issue.

Hello @rlargent,
Yes, there seems to be a bug where the EzloSecure is not properly interpreting the messages from the sensor, so it doesn’t show as tripped. The issue is already reported and should be solved in the next few days. Thank you for your comment.

Thanks Oscar,
Is there somewhere that the bugs are being tracked where we can see the status?
That would be super helpful so we aren’t reporting the same issues multiple times.
Also, It would be nice for us so after we see something fixed we can take action on our end such as removing and re-adding a device.

Hello @rlargent,
You can use our Community Feature and Bug Tracker tool for this. More information on the tool can be found here.
Also, you can track the integration request here and the bug report here.
Regards!