I have had, for many years, several Leviton 4-button Scene Controllers in both of my Vera networks. While they are definitely finicky to setup, once they’re integrated, they work very well and I much prefer these in-wall, wired controllers for a clean look (rather than having battery remotes stuck to a wall or floating around in a drawer). However, those Levitons are no longer manufactured, and it seems there are very few alternatives remaining. In fact, I’ve only found two, which is the point of my post.

Besides the Eaton 5-button Scene Controller (RFWC5AW) and the Zooz Zen32 5-button controller, are there any others out there this community is aware of? Also of interest to me - have I missed something along the way, or are Z-wavers just not using scene controllers much anymore? I personally prefer being able to walk into my home and have a buttons right there nicely integrated with my other light switches to kickoff scenes, but the lack of options would suggest they aren’t that popular.

This has become top-of-mind for me as I now think seriously about migrating from Vera to Ezlo - I obviously would like to keep my scene controllers, but the Levitons are not (understandably) supported. Any suggestions appreciated. I’m going to give the Zen32 a try, although I’m not crazy about the design/size of their buttons - makes labeling difficult. I would prefer to use the Eaton controllers, but they are not officially supported (I’ve made the request). Have I missed any other options out there?

Thanks in advance for feedback/guidance.

I don’t use them because I think they are confusing to guests, and most of my family they would not be able to read the buttons even if they were labeled. For complicated stuff we use the Mobile app (mostly for whole house music and the theater room lighting).

We do use the HomeSeer Dimmers that have double, tripple, quad taps that you can use to trigger scenes. But we only use 2 click and 3 clicks and they are super consistent through the house what they do, for example 2 clicks always triggers a lighting override (aka don’t like something that is triggering automatically with the lighting? Double click to stop it). That way home members know how to use them without confusing guests (they just look like a normal switch to guests who don’t need to be interacting with more complicated stuff).

Unfortunately this switches work on Vera, but I don’t think the 2,3,4 taps work on Ezlo, on Ezlo they only work as dimmers… but I could be wrong.

Also, those are the Z-Wave scene controllers compatible with our eZLO hubs: 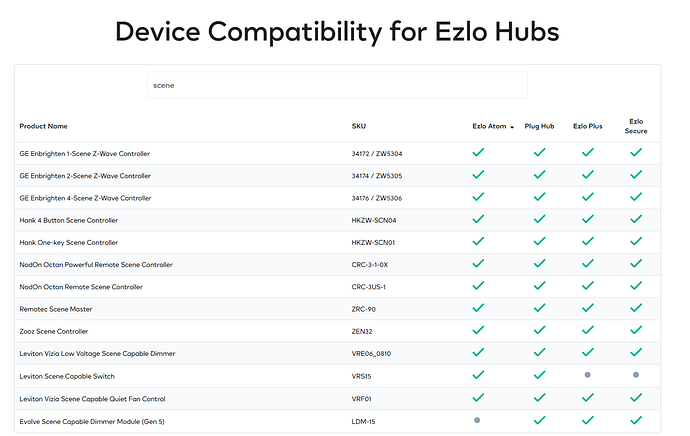 We will be attentive to your comments.

I have both two-button and four-button Leviton controllers that work beautifully with three Vera controllers in three different locations. Sadly, I have not found any device that can match the functionality/simplicity of using these Leviton devices. They are the reason that I’ve not upgraded my Vera controllers to Ezlo! It would be wonderful if Ezlo could find the resources to support these legacy devices before my Vera controllers finally give out.

@slackner Hi our team tested for you Home Seer HS-WS200+, have a lot of scene check this results.If you have any questions please contact we.

@Hornet - I’m not sure I understand the point of your post to my attention. I have not expressed any concern or interested in the Home Seer HS-WS200+ switch. The question I’ve posed in this thread is about multi-button scene controllers. A single switch capable of scene control is not a bad thing, but does not fit my use case. Nor would I would want to introduce a single-switch scene controller that would require a cryptic set of multi-taps to execute different scenes - not at all user-friendly - how would I possibly label that switch in everyday user language???

@shallowearth - interesting perspective. I’ve actually found quite the opposite. My scene controllers are super easy for family members/guests to understand and use. I’ve got buttons like “Evening Lighting” and “Goodnight” that do exactly what they say. I’ve used both the pre-made labeled buttons available from Leviton (at the time) as well as just creating labels on clear tape with a Brother P-Touch labeling machine. Both are very readable, but I do appreciate could be a challenge with poor eyesight. I have to say, though, that my favorite all-time scene controller is the Evolve LCD panel that allows you to display custom labels on a backlit LCD panel next to the five buttons. While I still have one of those active in one of my networks, it is a dead product and required crazy gymnastics to get working with Vera. It would be awesome if something similar was produced again, perhaps with a better form-factor. I like the idea of the Brilliant switches, but they obviously are not z-wave capable.

I did attempt to install the Zen32 in place of one of my Leviton 4-button scene controllers yesterday. Unfortunately, I clearly did not do enough research first. After successfully including the Zen32, but seeing it come in just as a switch rather than a scene controller, I found a Zen32 tech note indicating that scene control is not supported on Vera. With Vera, you can only use the four smaller buttons on the Zen32 by setting direct associations. What a disappointment. As this scene controller is apparently compatible with Ezlo, it was my plan to “field test” it in my current Vera setup for usability and, assuming all was good, use those as replacements for the Levitons. I can still do that, but I really wanted some hands-on experience with them first.

The Enerwave ZWN-SC7 used to be my favorite, but in the last couple years it has become unreliable. It is supposed to just kick off a scene on my Vera Plus, but somehow when my “I’m leaving” scene is called by this device it only shuts off half of the switches. Same scene called manually or by asking Alexa runs fine. I mostly use it to turn on/off my garage lights, my driveway lights, and basement lights. Main reason I got it was to trigger my “I’m leaving so turn off everything” scene when leaving through my garage. This was before Alexa integration, so was the only way to call scenes like this without digging out your phone, which sucks with your hands full.

The 4 button Zone controller VRCZ4-MOZ is awful because it insists on making and keeping scene state rather than just calling it. I suppose small scenes this is fine, but in complicated ones it just gets confused for “on” and “off”. You can’t trigger OFF unless all devices report back they are in the “ON” scene first.

The 4 button toggle Leviton Scene controller VRCS4-MOZ is currently my favorite. You can have it fire 8 scenes. I have this at the top of my stairs and use one button to turn on enough basement lights for me to egress to my tuck under garage and the other side of the button shuts off everything in the garage and basement when I go upstairs. Another button turns on all my outside lights and the other side turns them all off. I also have an “I’m going to bed” button.

Scene controllers were extremely valuable to me before Alexa integration. I hated having to find my phone, unlock it, and wait for the apps to wake up, just to turn off my garage and basement lights ever time I leave my basement. Now I can ask Alexa to do it, so it’s not quite as helpful. Which is good, because I simply haven’t been able to find an affordable Scene controller that is actually available anymore. I don’t see Scene controllers ever going completely away. Especially when the Alexa integration gives you the middle finger if you even think about trying to lock your front door in your bedtime scene routine. I’ll still likely have a physical button to close the garage doors, lock the front door, and turn all my lights off for bed, since Alexa refuses to do that.