Vera vs Ezlo what you say?

I’d like to hear from those of you that have already fully migrated from your Vera hub to a new Ezlo hub?

How has it gone ?

Seems you are braver than me…

My house still running on my trusty old Vera Plus and now Multi System Reactor as the logic engine.

How is your new Ezlo hub and Meshbot rules behaving ?

I have a EzloPlus collecting dust. I would gladly migrate if they could get the NuCAL to work so I could at least cover a fraction of the functionality my Vera can do.

I mean, the Vera hub is on borrowed time, plugins are not being maintained anymore so some “cloud” integrations have stop working or will stop working soon.

Vera is still the workhorse in the house however I have some key workloads performed by Ezlo Meshbots and they perform reasonably well.

Admittedly it has been a few months because I have been busy but every time that I have tried to recreate things that my Vera Plus does, I run into a “on our roadmap but not implemented yet” so I’m not quite ready to go down the long migration path only to hit a dead end somewhere.

I too have been watching Matter very closely.

It is important to note though, I feel that there has been a decent release cadence that includes a number of features and bug fixes that improved stability reliability all while Putin is wreaking havoc on some of the Ezlo team’s lives. Kudos to those who are making it all happen.

I won’t be retiring my Vera controller in my primary residence anytime soon. While updates are no more with Vera it is very stable and does the things I need it to do. I have a large ZWave network and several cameras and they all work fine together.

I like the promise of Ezlo and the meshbot world is interesting but the Ezlo platform isn’t as hardened as Vera yet. I’m hopeful it will get there but I’m not willing to abandon my stable Vera world just yet.

Things I need to see before I cut over everything to Ezlo:

I think the long run is better with Ezlo but need some progress on the above to take the next step for me. The good news with Ezlo is there are periodic software drops and many Ezlo staff frequent this forum. Should only be a matter of time before the platform is as stable as needed and then the advanced features will take it over the top.

My situation is pretty mixed. I’m slowly moving over the Ezlo, new devices are only onboarded on the Ezlo hub, if supported. My Vista 1203 doorbell is probably not even supported by the Vera.

Some lights are on there, my blinds are on the Ezlo etc. A total of 40 devices show up on the Ezlo, though some of them are actually only paired on the Vera or both (through a Hue bridge). I have 21 Meshbots showing as well.

All in all, it’s working pretty reasonable. So far I had one real outage (last week, caused by a rare bug during the firmware upgrade). That outage was fixed very fast by customer support.

Control of my hue lights is still pretty slow, and the Vera App is even slower to react. I’m not in a hurry to migrate the remainder of my Vera, though as functionality improves I will continue adding things to the Ezlo. I can image to be fully migrated in maybe 1 year.

I have paired 8 devices with the Ezlo hub and regret doing so. The hub itself is okay, but sorely lacking two major components: a UI for the laptop and the fantastic reactor software. I do not understand why it is taking so long to release a non-beta version of the UI. I am hopeful that RicPapa will develop a version of Reactor for Ezlo before Vera is no longer supported.

https://ezlogic.mios.com/ is the UI for laptop (web version). 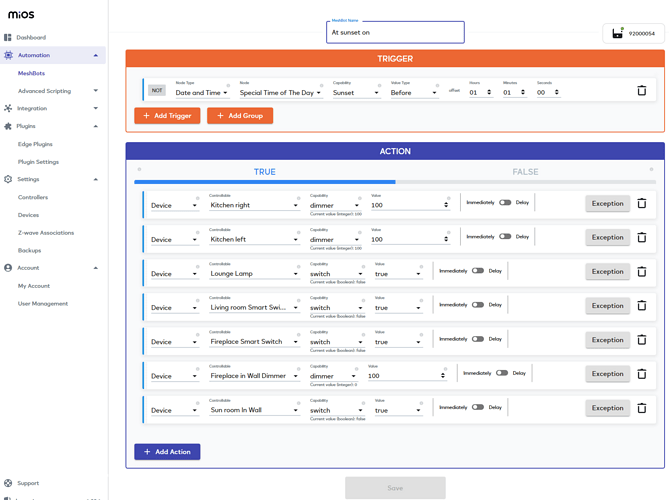 Please let us know what you are trying to do that EzLogic can’t do so that we can get it added asap for you.

I am hopeful that RicPapa will develop a version of Reactor for Ezlo before Vera is no longer supported.

I did (and it’s not the product mentioned in the prior post).

dhuster
… a UI for the laptop…

The ezlogic.mios.com interface is actually quite nice. Give it a try.

I have several scenes that I use to toggle a light switch or a mode and I would like to consolidate two such scenes into one. I have been able to create two separate triggers using the mios meshbot software by using the “OR” operator, but I have not been able to associate two separate actions that will execute depending on the trigger. For example, if a trigger occurs in the morning and the house is in “Night” mode, I want to put the controller into “Home” mode, but if the trigger occurs at night and the house is in “Home” mode, I want to put the controller into “Night” mode.

According to your needs, you can configure a MeshBot as follows:

When the trigger occurs and it is in the morning (you can change the time according to your time zone) the controller will execute the “True” action and go into Home mode. 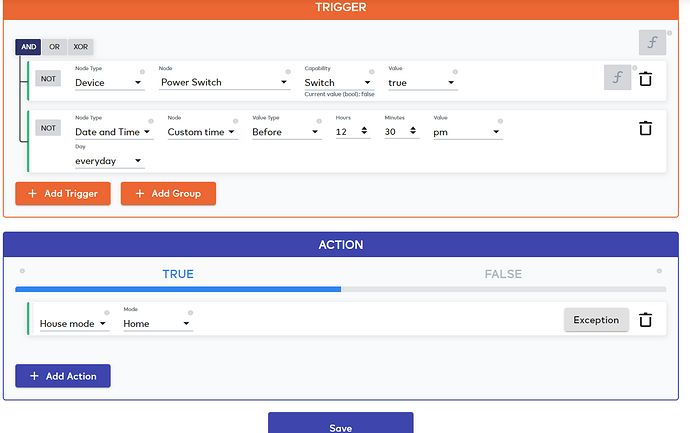 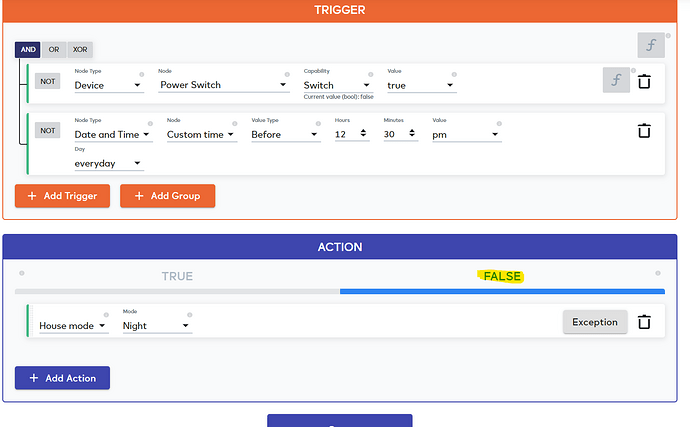 Please let us know if you have any other question!

Used Vera Plus forever – was “marketed” that the Ezlo Plus did everything that Vera did. It’s been pretty disappointing. It’s almost as if they bought the IP and had no clue what they bought. Such promises make or break credibility of a company and I gave up on Ezlo after it corrupted half of my scenes and forgot the details in my devices after updates. Some of the scenes were working and I just said… F-it… I don’t have time for this.

Recently after 2+ years I factory reset the Ezlo plus and added in my 60+ leviton and other zwave. We’ll see if it holds a basic config for more than a week. I do notice that even after a factory reset, that the unit has two entries for VOI and Alexa in the phone app – support has yet to fix that. Clicking on one of those entries resets the device… priceless.

I’m not sure if it still is missing basic integrations like the Honeywell VAM or MyQ garage controls. When I initially tried to set it up it wouldn’t even pair up with standard zwave Schlage and Kwik set devices.

I do notice that meshbots created in the ezlogic.mios.com doesn’t seem to show up correctly in the scenes of the Android App. (and vice versa), especially notification options. It appears that they are exceeding the capability of the old mobile app without providing a better one – It’s pretty shoddy for a released product.

I’d recommend anyone going for automation to go with SmartThings or and equivalent big dog company that has more concern over the development cycle of a product and not putting a mess in the paying customer’s lap. Many of us have invested thousands in automation, to be treated like we aren’t aware how slipshod ezlo plus is.

We have the terminology Exceptions, which you can set the conditions to check before executing an action.

So in your case, your trigger would be : "A trigger - device status change (for example) " (It can be any other trigger as well)
And you actions would be either put the controller in “Home” mode or “Night” Mode depending on other conditions. Those conditions are expressed as Exceptions in our platform.

Here is an example MeshBot for your case: 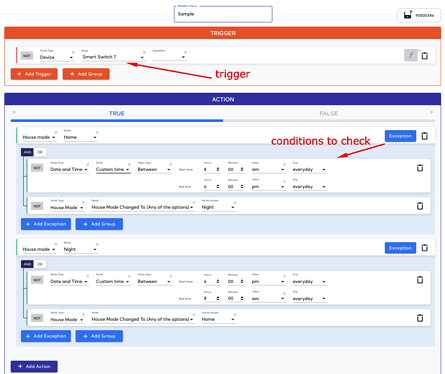 Patrick, now you have piqued my curiosity. Because I like the Reactor software so much, please let me know what you have developed for the ezlo controller and how to access it.

I’ve got Ezlo plus working for over 54 lights, switches, etc and 19 blinds. When I made the switch (2021 iirc), I had to add each item. PITA. Now, on occasion, ezlo will not move the blinds (iblinds), or may not include a device. Often, scenes to open or close the blinds and 1 or 2 of them will not work.

I’d say ezlo has been reliable about 90% of the time.

How can we get exact details/logs about those problems. @Alvaro_Ochoa can you assist here pls.

I’ll send you an email so we can coordinate the proper way to get some logs from your controller.

This thread reminds me of the many UI5 to UI7 threads from years back. I stayed on UI5 for a long time after UI7 was initially released. So I might make a jump to Ezlo some day. Unfortunately the fact that all of the plug-ins have to be re-written for this change (not all did for UI5 to UI7) means it is real easy for me to look at other home automation platforms this time around. It really is all about the plug-ins.

I would say my experience with Ezlo is very similar to Ryantantum20. I have one Ezlo plus running in a vacation home and three Vera plus running in other homes. The Vera’s are now very solid and robust with the only real issues being device failure (blue light of death on a couple of my original zwave rocker switches recently and inconsistent operation of one particular group of scenes that turns on the lights when a Schlage lock is opened. Those scenes have always been hit or miss. Work about 75% of the time.
The Ezlo is not as consistent for even very mundane scenes, or Meshbots, turning on lights at dusk and off later in the evening. 90% is probably a good overall average. I have tickets in support right now for a couple of problematic meshbots to try and get better reliability. I really think Ezlo needs to look at some sort of check process to ensure scenes have actually executed. Looking at the logs, you can see the instruction to fire the action did in fact occur but for whatever reason, the device did not respond. Meshbots need to be 100% reliable if this technology is going to be mainstream accepted.
I am also reminded as Wilme2 notes, of the earlier days with Vera. Every time a change was made there was a relearning curve for vera and a need to troubleshoot the system. I see the same thing happening with Ezlo. They are clearly working hard on making updates but those updates are not always ready for prime time. And the updates sometimes impact existing Meshbots in unexpected ways as variables or options are changed or added. I am trying hard to stay patient as I think there is a really good system at the end of the tunnel but it’s hard not to be frustrated. I will say, Ezlo support is very responsive and working hard to expediate solutions to the issues raised but I think we are all beta testers here.

…“This thread reminds me of the many UI5 to UI7 threads from years back. I stayed on UI5 for a long time after UI7 was initially released”…

So true. I did the same as it seemed horrible to be an early UI7 user. Eventually cut over and life was fine.

Seems like maybe an architectural question with all this talk of 90% execution reliable. Missing some sort of completion handshake or post operation audit functionality. ZWave commands have to be 100% reliable as do scene executions. I am sure there are subtleties why that is easier said than done but the Vera teams figured it out. I suspect a fundamentally missing aspect with the Ezlo design.

Launching a ZWave command or a Scene start and then walking away without any notion of completion is no good. More backend logic please.