I’d like to synchronize two Leviton DZ6HD-1BZ dimmer switches. I understand there are several routes by which this can be done, including meshbot automations, scenes, and device associations. My understanding is that the priority that these three should be attempted in is (in order of most reliable/quickest to least reliable/slowest):

And vice versa for turning the dimmer switches off.

Thank you in advance for the help - I am a novice in the home automation world and would like to learn. Could someone help point me to a guide that can help or provide steps?

We will create a support ticket for your case. Please keep an eye on your email inbox.

The Leviton DW6HD-1BZ dimmer is a discontinued Wifi Dimmer, not a Z-wave dimmer, only Z-wave dimmers support Device association to my knowledge, can you confirm what dimmer we are talking about?

You’re correct. I made a mistake and copied “DW6HD” instead of “DZ6HD”. The correct model is DZ6HD and I corrected the title and post. Whoops!

Thanks for pointing it out!

The best option would be to create different MeshBots for each action, in this way they can work more stable and you will have more control over each sequence of MeshBots. 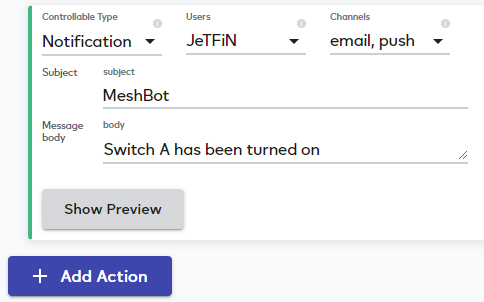 Now, you can do the same for the rest of the MeshBots using Switch B as a trigger and Switch A as the actor. Also, change the values when you want the switches to turn off by selecting false value instead of true.

Let us know how it goes.

Direct Association is definitely the best option but is fairly new in the Ezlo Controllers.
I looked at the documenation and Group 1 is the correct Association group for this dimmer. So on each switch you need to add a Group 1 association to the other switch. then they will work as you described.

These are the instuctions for setting up the Association: Device Associations in ezlogic.mios.com - Company Talks - Ezlo Community

I haven’t tried this in Meshbot’s yet, so not sure its possible ?

In Multi System Reactor (MSR) rules engine I did it this way as it also controls of the dim level not just on and off states.

I created a virtual “master” dimmer device on my Vera controller.

Then use that virtual dimmer device in the rules trigger. If it changes dim level from any value to any other value, the rule is triggered.

I then in the rule have a local expression / variable that gets the current dim level of the virtual “master” dimmer device.

And in the rules action I control the two real lights that I want to synchronize and set their dim level to that of the current level of the “master” virtual dimmer device.

I’d be interested to know how to do the same in Meshbot’s ? As the expression code language is different to that of MSR and I don’t think they have a “changes” logic operator either ? 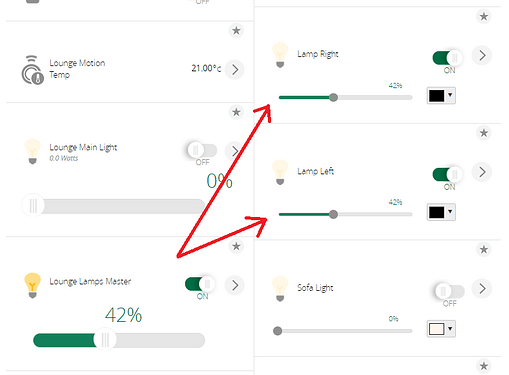 Just checked doesn’t look like they have a “Changes” logic operator yet in the Meshbot rules trigger. 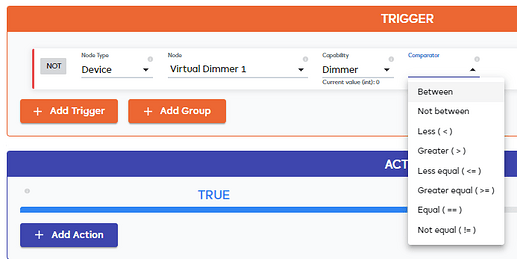 And I got an error when trying to create my expression

So don’t think I could currently replicate my MSR rule in Meshbots.

Unless they have some other different way to achieve this ?

EDIT: For the expression you need to add “return” first.

However you can’t seem to do much with the expression? Can’t seem to use it in a Meshbot trigger or action.

EDIT 2: These are not fully auto generated expressions. It just adds the “item” you selected. You have to then add code around the item like this, its now returning the current value of the virtual dimmer device.

A test was set up by creating a Meshbot in the way you described. The logic works out, but it seems evident that the Ezlo doesn’t quickly recognize the changed status of a switch. I have it set up so when switch A turns on, B turns on, and when A turns off B turns off. When I turn A on physically, B turned on and off with it once but is now not synchronized. However, if I turn switch A off or on within the Vera controller app, switch B follows suit. I have noticed, as well, that when the switches aren’t synchronized, their status also isn’t updating in the Vera app when the switch is toggled.

I will now try the device associations route as mentioned by shallowearth.

I gave this method a shot - here is a screenshot showing two dimmers associated with each other as well as a shot of what was in the menu when setting up one of the associations. Note I am unable to change the “Source Group” and “Source Channel” selections in the drop down menus.

[SEE NEXT SCREENSHOT IN NEXT POST DUE TO NEW USER LIMITATIONS]

The switches appear to not be synchronized. Turning one on or off does nothing to the other and vice versa. 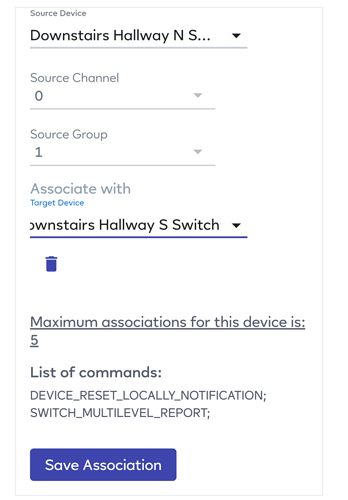 So there are multiple ways to do this as you said:

First with meshbots, You should create:
1 meshbot for Switch A to either turn on Switch B or turn it off

1 other meshbot for Switch B to either turn on Switch A or turn it off.

This works and not gets stuck into a loop because after first “turn on” actions, subsequent actions won’t trigger because the Switch is already in the “on” state.

Second is with Device Associations:
In the device associations menu, when you select a device it shows possible groups to create the association. So if you see there only 1 group, it means your device supports only 1 group.
And in order to send a “on/off” command to another device, your group should support “BASIC_SET” command. Your Leviton switches do NOT support this command sending via associations. Here is the link for your switches.

image1203×204 24 KB
(This is zwave sniffer export, so you can see association is done but one node sends only notification to other node directly.)

But we had this working in our testing system via zooz switches :

image1440×280 196 KB
(This is zwave sniffer export, so you can see association is done and one node sends BASIC_SET command to other node directly.)

Another way would be writing Lua script to turn on the other switch and even setting a dimmer level to it.
If you like we can work on it as an example as well.
Mean while we are working on a new feature on the actions part of the meshbot to set an expression at runtime to get the value of the device and then you will be able to set it as a value for the other switch. Then you wont have to know extensive Lua code. So stay tuned for that part.

Thank you for your comprehensive reply - it has helped narrow down issues. I think a valuable resource would be some way to know what switches/dimmers are capable of what, as I was purchasing these specifically to do this action while building my house during which time I was unable to dedicate the 10+ hours I’d normally be able to dedicate to this type of decision due to the aforementioned home-building. However, that is a separate topic.

Do you know what specific words in a specifications sheet I should look for to be able to identify dimmers with this functionality?

The meshbot method works when the lights are controlled through the web app/phone app, but not when using the switch itself. It appears that the Ezlo Plus isn’t up to date on the status of switches. Is there an expected multi-minute delay or is this an issue to troubleshoot?

EDIT: It looks like this right here is the important text:

I never would have imagined manufacturers to produce dimmers without this functionality, as it seems integral to the concept of home automation.

The meshbot method works when the lights are controlled through the web app/phone app, but not when using the switch itself

I’d expect the Meshbot rule examples above to work also when operating the lights manually via the wall switch.

The current state on or off should be updated to the Ezlo controller when using the wall switch and thus triggering the rule also.

But this is not the case?

Correct, that is not the case at the moment. When the wall switch is activated, the status of the switch according to Ezlo doesn’t update.

Actually it is quite rare to find Switches that actually support direct association correctly. The Eaton RF line supports it, as does the HomeSeer branded switches. I also believe the Aetec Labs, and Fibaro micro switches do it, but I really do not like those so am hesitant to recommend. In Europe I believe the Zooz brand is the most common for supporting direct association. I am less sure about other brands, it is less common that you think. Also note the Group number is defined by the manufacture and not necessarily indicative of the capabilities.

Hi @JeTFiN , as I stated in the post, you can look for BASIC_SET command in the spec sheets association section from the manufacturer.

And for the meshbot seciton problem we can get help from the customer support to further dig into the logs, since it should work fine. @SaraV can u help here pls.

We’ve been tasked with digging around a bit more to see what’s the issue and why your Meshbots aren’t working after the first time the trigger condition is met.

Please send us a PM with your controller’s serial number and allow us to create support credentials to test further and replicate the issue.

Just for documentation’s sake, the support ticket number 278013 is the same as the issue in this thread.