I’m hoping someone here can help. I have several Qubino Flush Thermostats (v2) installed in my home and would like to know when they are actively heating and when they are not. (not whether they are in heat mode, because they could be in heat mode and have met the setpoint and therefore have turned off the heat). I also have 2 TKB Home thermostats, so I know there is a variable named “ModeState” that provides exactly this information - it’s value is either “Idle” or “Heating.” Here is the problem (actually 2):

Any suggestions for how I can get this working? I need to know if the heat is actually being drawn or not.

Regarding the two devices that currently have no “ModeState” variable you could try and add them manually. On each of those devices go in to their Advanced area and then New Service tab 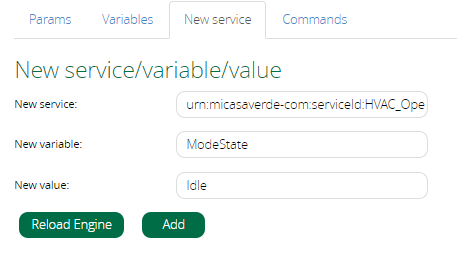 And regarding this variable not changing from Heating to Idle on these Qubino devices, I assume you are doing a browser refresh each time? The value will not update in the web GUI unless you do a refresh.

Thanks for the response @cw-kid!

I went ahead and added it to the two missing.

The variable never changed (always Idle). Yes, I am doing a browser refresh. I also have a scene which fires when the state changes and it is not firing.

I don’t know then as I do not have any of these Qubino Thermostat devices.

I do have a TKB Thermostat and that does change the ModeState variable OK from Idle to Heating.

Have you searched the forum for any answer ?

Only other thing you could try is to un-pair and re-pair one of them, see if that gets it working?

I tried that - no avail. I’m hoping someone with one of the Qubino thermostats can chime in (or someone from Vera - I’m suspecting this is a bug).

Apparently there are two different versions of this Qubino Flush Thermostat device.

The second edition sounds like it had some issues in Vera that the first edition did not.

I would confirm what the model numbers of the devices you have are ?

I have the second version. Is Vera still supporting their product? Perhaps they can fix it?

Vera firmware is no longer being updated, so if a device needs a fix in firmware then you won’t see that happening now.

Another example would be the V2 Fibaro RGBW modules, I think there are some issues with those that never got resolved.

Are you running the last 7.32 beta firmware?

Maybe open a support ticket for your issue, you may or may not hear back from them however.

As for the new Ezlo hubs Qubino ZMNKID3 Flush ON / OFF Thermostat 2 is listed as being supported.

But that doesn’t necessarily mean this particular variable will be exposed and working. As currently you can’t even see any device variables listed in their Web GUI and their devs seem clueless as to why we need or want extended device settings.

You can also see the support page with the up to date list here. Hi All, As you know, we have been building our own Z-Wave stack from ground up. We had two things in mind, performance and stability! We are now ready to share the progress on supported Z-Wave classes and integrated devices as of today. We will be updating this post after each release. [image] [image] You can see the %age coverage of all Z-Wave command classes in visual format and how we make progress for each release “S” a…

I also have a scene which fires when the state changes and it is not firing.

Can you show me a screen shot of your Vera scene and how you were trying to trigger off the current state of this ModeState variable?

Is that even possible in a standard Vera scene?

These are the trigger options in a Vera scene for a Thermostat device: 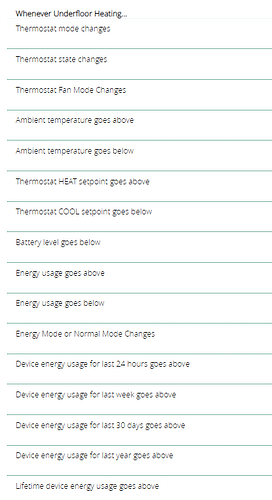 Maybe its the State one then:

EDIT: That trigger does work in a regular Vera scene, I just tested it OK.

EDIT: These triggers do NOT seem to work in Ezlogic the rule is not triggered when the Thermostat ModeState changes. 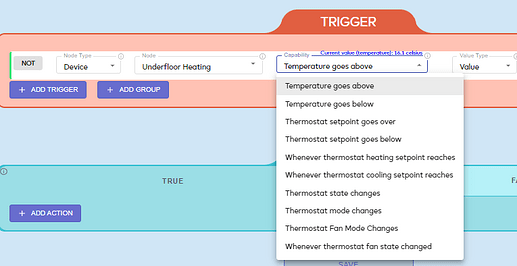 Looks like a trigger would also be possible in Multi System Reactor using hvac_control.state or by using an extended attribute for the ModeState variable.

Of course assuming that ModeState variable is working, which its not for you and these Qubino devices.

Further research points to the issue seeming to stem from the Qubino Thermostat not being recognized to implement 0x42-COMMAND_CLASS_THERMOSTAT_OPERATING_STATE. Does anyone know if this is a Vera issue (e.g. Qubino implemented support but Vera doesn’t recognize it) or a Qubino issue (they actually failed to implement this command class)?

Perhaps I don’t understand the problem or what you are trying to achieve. You should be able to check the setpoint and the actual as reported by the thermostat and with knowledge of the thermostat deadband setting know whether or not the thermostat is calling for heat. Granted it is not a measurement of actual heating. But the ModeState setting is not certain either as is clear from the long string of posts You could put a temperature sensing zwave device near the register and monitor the temperature. That should give you confidence that the heat is on or off.

@gfetzer - thanks for responding. I am trying to achieve knowledge of whether the heater is actually heating or not. Knowing the setpoint, the tolerance and the current room temperature isn’t sufficient because I won’t know if the heater is actually heating or not. While it could be that the thermostat hasn’t yet reached the desired temperature + deadband and therefore is drawing heat, it could also be that the thermostat already reached that temperature and has therefore shut off the active heating as it drop back down to temperature - deadband before it starts up again.
Make sense?