Looking for info on these new Ezlo controllers, before i put my money on the table.
Is there anywhere we can see an example of the Ezlo scenes and rules engine.
Also do all the scenes/rules run locally
What is VOI , What exactly does it do. Is its only function to turn alexa devices on and off?
I also came across the term Meshene, i keep reading this terms on this forum, but finding difficulty getting info on it…

Can I control with Ezlo hubs smart devices that are compatible with Google Home or Alexa?
Leonardo_Soto March 11, 2021, 1:37pm #2

The Ezlo VOI can function with Alexa and Google Home to control devices assigned to them, as per the scenes themselves, they will run locally unless the scene has a time restriction and the controller loses connection, in that case, it won’t run because the time is getting retrieve from the internet.

The scenes have several rules depending on the devices you own, like device triggers, date, and time triggers, and you can also have operators like AND, OR, NOT.

Meshene is a new implementation for the scenes, and it should bring improvements in the future for the platform.

Hi thank you for replying.

The link you provided seems to be a FAQ page for Vera, does VOI work with Vera?
Edit. Found the correct page for future users.

How to chat with your voice assistant using Ezlo VOI™

Do you ever want to talk with your voice assistant but you don't want to wakeup your kids? Or maybe you want to surprise your guests by turning on your lights and play some songs without them notic...

So timed scenes will fail if internet is down, does the hub not have an internal clock? How long can internet be down before timed scenes will start to fail? Does the internal time value in the hub not update once internet is down?
I would have thought a hub shold have an internal time server. Is this the same for both plus and secure.
So there is no demo anywhere showing how the scenes and logic work?

does VOI work with Vera?

No only for Ezlo hubs / firmware

does the hub not have an internal clock? H

Don’t think so the Vera hubs didn’t either.

How long can internet be down before timed scenes will start to fail?

If you reboot the Ezlo hub it will likely lose its correct time, the Vera hubs did.

If the hub is not rebooted whilst the internet is down, it should keep its time I would think, might be some drift though.

This is what I know about the Vera hubs. I am only assume the Ezlo ones will be the same in this regard as I don’t believe they have onboard real time clocks / “internal time server”.

Don’t think so the Vera hubs didn’t either.

So one hub made a goof, doesn’t mean Ezlo should follow suit. I would think that a hub that works locally, should work locally, including time events, and not be dependant on internet connection.

I am looking for a plug and play hub, but i want it to work fully off line and i want a good logic/scenes interface. I was hoping Ezlo plus or secure would do that, I have a house in Sky and internet can be flakey at times.

@Ezlo_Response_Team can the hub be configure for a local time server?

I would think that a hub that works locally, should work locally, including time events, and not be dependant on internet connection.

I agree and what I said about these new Ezlo hubs maybe wrong. But I’m quite sure there is no onboard real time clock. Maybe they have done other things to make improvements to keeping the correct time when the Internet has gone down ?

We have opened a ticket in Zendesk replying to your questions. Please check your email to continue addressing this issue.

I am going to post a section of your email response here as it may help confused people.

The controller is capable of handle the scenes configured in the hub even without an internet connection because the units have a real-time clock to manage this,

So i was confused by previous response from Ezlo, I think they confused my question about scenes/rules and VOI,which in turn confused me.

So normal scenes should run fine when off line, it’s the VOI scene that may fail.

Still would like to see a demo of their scenes/rules interface though.

VOI integration with the Alexa and Google Home voice assistants won’t ever work with no Internet as its all cloud based.

I wasn’t aware the new hubs had internal real time clocks. If so great. But I’d want extra confirmation from someone if that is actually fact.

I might disconnect my Internet and reboot my Ezlo Plus hub and see what happens with regard to its time?

I connected to my Ezlo Plus via SHH 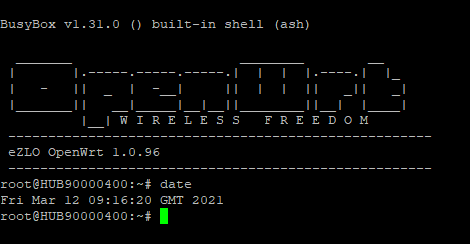 I then blocked the Ezlo Plus on my router so it has no Internet access. 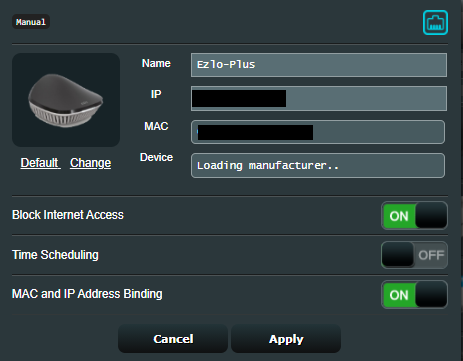 The Ezlo Plus hub then started pulsing with an Orange light.

I then rebooted the Ezlo Plus hub via a SSH command and connected back in after the reboot.

The date and time is still correct with no Internet access which is very promising if it stays that way.

I also tried to ping a Google DNS server it wasn’t able, proving this hub has no Internet access currently.

I am going to leave the Internet access blocked for a while to see what happens ?

If I did this with my Vera Plus it would of lost its time and would be 1st of Jan 2000 I think it use to go to.

I’ve just used the Android Vera mobile app on my phone to connect to the Ezlo Plus. It connected OK. I then created a new scene with a schedule for in 5 minutes time to turn on a lamp. The time shown in the scene creation was correct also.

And the light has just turned ON.

So far so good then for this Ezlo hub with no Internet access.

Just out of interest. Which router do you use, where you can specify pictures for the devices?

I use an Asus RT-AC86U router running Merlin Firmware. I go to the Network Map area of the GUI and it lists the connected devices, if I click on one, it shows similar to that screen shot above. If I then click the default icon for the device, I get the option to add my own png images etc.

Every device on my LAN has a nice icon showing the type of device. I also created a spreadsheet listing all their IP addresses, if static or DHCP, their mac addresses, if they are LAN or WIFI 2.4GHZ or 5Ghz, if any ports have been opened for those devices etc. I have a lot of devices connected so a spreadsheet helps me keep everything organised.

And I don’t use WIFI IOT devices either none of those junky WIFI plugs and bulbs. 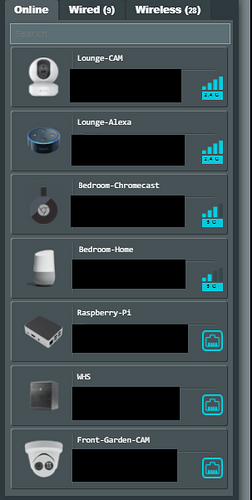 Interesting. I’ll take a closer look at that…

Just rebooted the Ezlo Plus hub again and now the time is wrong its actually 9:56am

So maybe it does not have a Real Time Clock onboard.

I don’t remember seeing a battery on the circuit board with the pictures we saw of these hubs when they were cracked open.

Can we have confirmation why my hub is now showing the incorrect time when it has no Internet connection ?

And can I point it to a local NTP server on my router?

Oh dear its doing weird stuff now, that test scene I setup earlier was a one time scheduled event for 9:35am.

That light has just turned on again as the hub now things its 9:35am.

We have opened a ticket in Zendesk replying to your questions. Please check your email to continue addressing this issue.

I think its also better if your response is also shown on the forum threads as well.

The user has asked his question on the forum.

And you are only posting the answers via Zendesk and his support ticket, which none of us can see, so then no one else reading this thread would of seen what was said.

So anyone reading this thread in the future looking for an answer would not find one.

Thank you for checking, The quote i posted was from Ezlo response teaam, so they seem to be mistaken, as your testing(thank you) seems to show the scenes do not work when internet is down. Disappointed that the response team are giving unclear advice. If it was not for your testing
I may have wasted my time with these new hubs.

From that fact alone it looks like the Ezlo has failed to make my short list of hubs.

Ezlo controllers have an inbuilt clock. However, they are not battery-backed.
What that means is: It requires initial internet access to sync the internal clock for the first time. It still uses its internal clock to keep the count as long as there is power. Every time there is an internet connection, It will re-sync its internal clock.

If there is a big-time delay (weeks/months) between internet access, then the internal clock, as long as it’s powered, will serve well with the exception of Clock drift - Wikipedia clock drift. However, this is a standard problem for “any” clock in the marketplace.