I’ll be honest, I’d love a Star Trek LCARS themed solution like this

However, looking for the prettiest (not most functional) solution to replace my current Kindle Fire entry control system. Even though I’m Windows centric, I’ll even look at buying a used iPad or Android tablet device if it provides a great experience.

I use Grasshopper on my Phone and Tablet which is super quick (especially with Live tile shortcuts) and super functional. However, it doesn’t have any of the pretty graphs that I saw in ImperiHome.

What is your favorite wall mounted tablet app?

There’s an LCARS theme for SQ Remote by the way.

I don’t know how I missed this post and reply. Thanks @Strangely. Will look into SQ Remote.

LCARS home interface would be most excellent.

I’m still on the quest for the coolest looking tablet interface.

I’m a Windows guy as well (work at Microsoft), and currently use Grasshopper as well, although have been playing with AutHomationHd thru a few borrowed Android tablets (as well as on Win8 thru Bluestacks). I really like the UX… pretty flexible. ImperiHome looks interesting, but would likely need a larger tablet (+ 9") to get the most from their dashboard view.

Have you done the wall mount yet?

At a high level, I’m looking for a large “glance pane” for the following:

Wow… you are really taking the Trek theme to the next level!!!

I’m just looking for an alternative to super expensive (e.g. Leviton) scene controllers. If i can solve the wife factor… seems like an inexpensive tablet will do all that and more, for the same price.

@tomgru, this is heading in the wrong direction, but I have one of these for the master bedroom and it’s sick. 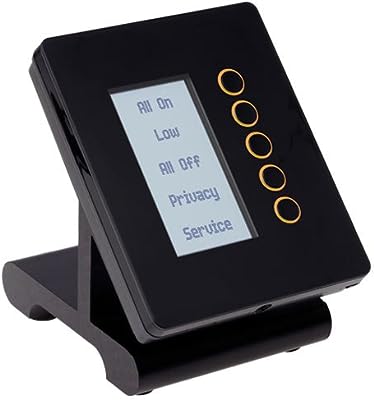 You can change the menu as the day progresses (in AM, it’s a snooze button…in PM, it’s the goodnight button).

If your going to splurge on a scene controller, this is the best ones IMHO. Sadly, I could only afford one.

I think once the bRight Switches hit the market the Evolve ones will be a moot point. While they are nice, they are too expensive. Of course, just my opinion.

Bright Switch: The next generation of wall tech.

Replace light switches with beautiful images and powerful touch-screen commands. | Check out 'Bright Switch: The next generation of wall tech.' on Indiegogo.

To Agile and TC1… a very funny coincidence, as i was literally just talking to a guy at work about both of these.

I’ve been looking at the Evolve as well… and agree it’s pricey. My other issue is that i need local load control if i use it on the wall. The guy i chatted with gave me a great idea to use an Aeon in-wall dimmer for the load, and then install the evolve over top, eliminating the local switch. Pricey, but would be a great way to do it (and get rid of my Leviton’s). Agile, have you played with the beta plug-in for the Evolve? Looks really promising.

TCI… i LOVE The bRightswitch idea… I just dont’ want to wait 3-5 months. And i must say, having a real/tactile button to turn on/off lights and scenes helps the wife factor quite a bit!

the bRights do everything right (IMO). They are basically mini- Android tablets with matching load controllers, designed to fit a standard switch box. Plus built-in camera, occupancy sensor, mic and speaker. You could have unlimited virtual controllers on the same physical interface. Powered by the house current. For about $100 or less. They solve so many issues.

We’re still recovering from Sandy, so I can afford to wait. Lot’s of new things in the HA world coming to market this year.

I have same fear, plus the additional plugin work that will need to be done.

As long as it operates like a “dimmer” as my current switches do, then for the price I paid ($73.33/each for 6 blues), then I think I’ll be happy as they are about the same price as levitons or cheaper. Also considering that as long as they are android based and they get access to the Google Play Store, I could easily install Authomation or ImperiHome and get even more functionality from it.

I do agree that it will likely take a bit to get the “extra” sensor info into the Vera for us (via plugins). That I can wait for. I’m not sure I really bought into them for the other stuff they added (Skype, Pandora, etc), so if those don’t work right out of the box, I think I’d be ok with it as I was really just hoping to pop Imperihome or AutHomation on them.

Check this LCars interface for iRule:

@SirMeili: Exactly. With the BT and something like Pandora, all one ahs to do is add a couple of BT speakers in a room and you have a cheap media player setup.

@SirMeili: Exactly. With the BT and something like Pandora, all one ahs to do is add a couple of BT speakers in a room and you have a cheap media player setup.

And hopefully they hold true to their word to me that they decided to take my advice and add a phono plug to it somewhere. This way you could also add it to a whole house audio setup. For some reason they are only adding it to the Bluetooth model, which I think it a mistake (it can’t be that expensive and Android should support it natively).

Either way, I’m hoping to possibly test running it to a central location for WHA, I’m not sure how being so close to the main power will affect it, but we’ll see. If it doesn’t work, then at least I got them to add it for free, so no loss to me!

Or just accomplish all of that with Sonos and the plugin

How much is each Sonos unit? And then you need a smartphone for each person or room to control it.

Until the costs of Sonos units comes down to something reasonable, it’s not a good solution for everyone.

I’m starting to think about doing this on my own. I’m a Windows house, and you can get no contract Lumia 520’s for $59. It’s a great phone, and already runs Sonos, Grasshopper, Skype, etc. You’d still have to work the same power issues as with tablets, and maybe not quite a cool looking, but should work pretty well.