VeraPlus not setting up true Association

I’ve set up an Association between two Zooz ZEN22 dimmers [VeraPlus, 1.7.5380 (7.32)]. The problem I’ve found is that there are long delays. Single tap On or Off takes two seconds to be reflected in the controlled device. Dimming up or down doesn’t happen until the paddle is released. During troubleshooting, I unplugged my VeraPlus hub and the association control stopped working. A true Z-wave association is supposed to be between Z-wave end devices. Once set up, the hub is not supposed to be involved. My testing shows this not to be the case. Why is the VeraPlus setting up a pseudo-association where the hub is involved instead of a true association?

Interesting never heard this before.

I have a Thermostat that is setup in direct association with a boiler relay switch. Might try turning off my Vera hub and see if they still work?

Well I wasn’t expecting that, with the Vera hub powered off, the thermostat doesn’t turn on the boiler relay.

As soon as the Vera hub was powered on again, the thermostat started working.

Think this needs more testing, anyone else got devices setup in association with each other and who can try this.

The Vera system doesn’t set up or manage associations between Z-Wave nodes. It’s architected to be a true rules engine hub, with all events flowing into it. It executes all the rules, then triggers send the actions.

There are good reasons for this: Vera speaks many protocols besides Z-Wave; Infineon, IP, and others. One central rules engine works the same with all of them. With one rule your Z-Wave switch can dim its lights, post a command to an Ir hub to turn on a TV projector, lower the RF-controlled Somfy shades, and raise an Infineon controlled screen.

Related, a Vera system backup stores all the rules. I understand that some Z-Wave devices don’t send their association data out, so backups are useless to them. (That may be really old info from the early days of Z-Wave, but that’s also when Vera’s architecture was designed.)

Another reason is that unlike events and actions, each scene-capable device has its very own unique method of configuring associations; and that method can even change between firmware revisions. There’s no way in heck anyone like Mi Casa Verde (or Ezlo) can keep up providing support to 1,000 different devices made by random manufacturers around the globe. It’s hard enough just keeping up with all the standardized device classes.

If you configure a device on your network to also be an independent scene controller, that’s fine and it can work (usually) but having two sources of control can cause race conditions or create loops that make troubleshooting really difficult. I started out that way, having some switches with independent scenes, but eventually learned that it was unworkable in practice.

Vera does indeed support setting up direct association properly. What may be happening is that your devices are too far apart and are using the Vera as a repeater for the operation. Really long delays in actions can also be a sign that the devices are just too far apart and are routing. Direct association works best when the two devices can talk directly to each other radio to radio, things get wonky or unpredictable when they have to talk through other devices (which is usually the Vera) to boost the Direct Association signals.

Vera/Ezlo tech support spent a couple of days troubleshooting. They were able to setup association between the two Zooz dimmers using Group ID2. The problem I found was that after turning off VeraPlus, there was a 15-20 second delay between actions at the controlling switch being reflected on the controlled switch. After notifying The Smartest House, I received the following explanation:

The delay you’re seeing when you unplug Vera may be due to a missing associated device. In other words, once the switches are included to Vera and associated with each other via Group 2 and Group 3, they do not lose their association to the hub (Group 1) - they are still linked to it. And if an associated devices goes missing, the switches will try sending the communication to it first (lifeline is always prioritized) before trying Group 2 or Group 3. This is why you’re most likely seeing such a long delay here.

Unfortunately, there is no way to have 2 Z-Wave devices associated without their main lifeline association to some kind of controller in Group 1.

This delay occurs even when testing switches that are neighbors within a few feet of each other. So, technically, association works, just not in a useful manner.

Hmm, while I believe the group 1 may be the culprit I doubt that group 1 association is actually required. I would turn off auto configuration in advanced settings, then delete group 1 and see if things improve. If not you can always add back Group 1 or exclude re-include if needed.

Yeesh… that is an unfortunate design choice they made. Kind of destroys the point of a direct association.

Not sure what you mean with Group ID 1? 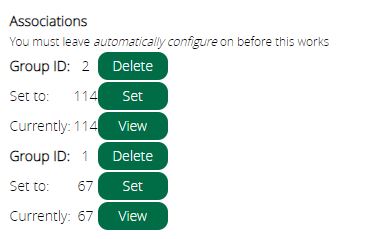 That UI is a bit untrustworthy it is only represents Associations that Vera set that it knows about. Vera doesn’t have a way to query the actual association table on the device, it just sents set or clear requests to the device and hopes that what it is showing you is corect based on that. Many Z+ devices like to have a Group 1 association on newer devices is often the Lifeline group which is meant to be set from the device to the primary controller, but it often is not “required” for this to be set, but it can make updates on device status more snappy of the device supports it (some brands use Group 99 for Lifeline). You can often prevent a device from setting up a Lifeline association by turning off auto config on the device. But in this case the manufacutre is saying the Lifeline association is required. Hence making the thing slow when the controller is down.

Note to KKL, you might try un-including the device and re-including it to totally clear the association table. If you have been fiddling with it alot, it may have bogus enteries that also slow things down (beyond the Lifeline problem).