has anyone got this setup and working, and have any notes on how to do it? I’ve setup the ip address and port etc, but no joy so far.

I’ve tried installing veraFlux, but am not seeing any data being reported in log files (debug option enabled), and consequently not seeing any details stored in InfluxDB.

If anyone has any details about how to setup and get this app working, or any other option, I’d love to hear!

I had the VeraFlux plugin working and sending data to an InfluxDB running on a Raspberry Pi at one point, but the Pi couldn’t cope with the traffic and data and it would hammer the Pi’s resources, so I disabled it all.

It was a good while ago I set this up but it did work other than the Pi not being fast enough. Looking in the VeraFlux plugin settings, you just specify the IP and Port number of your InfluxDB instance and the username and password for it.

You also, in the Veraflux plugin settings have to specify the InfluxDB name in the “Influx DB” field.

Thanks, can you remember which pi it was? I have a pi 4, so wondering if that can take the hit. I’m only hoping to have 2 devices (who’s data should be limited) to send data to it, as the rest can feed direct from home assistant. Unfortunately, the vera plugin for home assistant, doesn’t pass over the watt values for my fibaro switches

So you maybe OK with a Pi 4 and two devices.

I forget can you specify which Vera devices have their data sent via Veraflux?

Mine was just sending data for all devices on the Vera.

There is a field called “Static Tags” in the Veraflux plugin maybe you can use that somehow to tag what data is sent out to the InfluxDB ? So only certain devices data is sent etc.

As I said mine when I set it up sent everything for all the devices, which probably didn’t help the Pi being hammered.

That Pi 2 was sat in a draw not being used as I migrated Multi System Reactor, Node-Red and Java HA Bridge to another Debian Linux Box. They all were running on the Pi along with the InfluxDB and Grafana previously.

I am wondering now that I don’t need those things on the Pi, can the Pi cope with just running InfluxDB and Grafana alone?

So I’ve powered it up and disabled all the other stuff on there.

The VeraFlux plugin that I’ve enabled again, is now outputting device data from Vera to the InfluxDB / Grafana graphs once again. I’ll leave it up and running I think.

Looks like I had previously setup Grafana to monitor my Fibaro Dimmer 2’s and a Fibaro Double Relay, power usage also, I can see it logging that now. 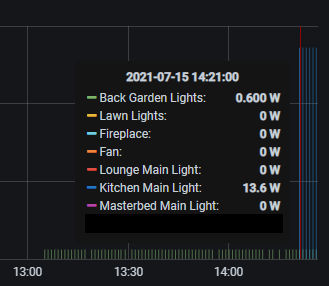 but am not seeing any data being reported in log files

It you mean this area of the VeraFlux plugin?

Mine is always empty also.

Maybe of interest? I am using Glances on my Raspberry Pi 2 to report it’s own CPU and Memory usage, to the InfluxDB / Grafana also.

My Pi is now just doing this and the Vera → InfluxDB / Grafana stuff, everything else it was doing has been disabled now.

As far as I know all Vera devices are reporting their data via the VeraFlux plugin to the InfluxDB.

I’ve not tried it yet, but if you have your Vera or Ezlo controllers linked to MSR then you could use that instead of the VeraFlux plugin to send data from your controllers to InfluxDB via MSR etc.