This meshbot runs sometimes but not always. Last night it ran and the notification was sent immediately but the light did not turn off after the 5 min delay. I think the same thing happened the night before. But earlier in the week, it ran properly. Last night, after I noticed the lights were still on, I ran the scene manually and got the notification, then 5 min later the lights went out as they should. I believe there is some sort of glitch with the 5 min delay. Need help to resolve! 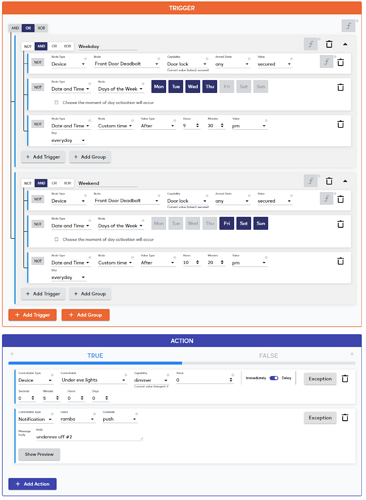 Thanks for bringing this to our attention. Since the issue does not seem to be regularly spaced we’d, like to investigate further and gather some data from your logs if you grant us access. We’ll also replicate the same meshbot on our end just in case there’s a generalized issue with delays in Meshbots.

We have been able to replicate the issue with weekdays as triggers being indefferentiable and it has been submitted for review. For the sake of testing as a workaround, would you mind creating two Meshbots with the same action but with different triggers (one for each group -weekend and weekdays-) and let us know how it goes?