The highlights of this release are:

The new LIVE update for Ezlo Linux firmware 2.0.31.2071.4 for Ezlo Plus and Ezlo Secure controllers contains:

[System issue] Restart services with an exception(St13runtime_error): Can not connect to spread

I just rebooted my Ezlo Plus but it didn’t upgrade. Is there some sort of gradual roll out to these firmware releases? Or is there a special command to force an upgrade? I suppose I can just wait but wonder if I can do something.

I just checked and my main Ezlo Plus controller has updated itself to this version.

However my spare Ezlo Plus controller has also updated to this version.

BUT… I previously turned off the Updates for this controller in the UI. So why did it update ??? 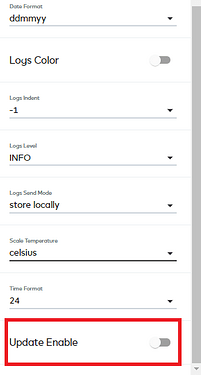 “This hub is on the beta testers list. We force FW updates for hubs in this list.”

So your hub should not update if its not enrolled for beta updates.

Hi @curiousB
Yes, we have a gradual rollout for new live firmware releases. It takes up to 24 hrs to upgrade all controllers.

That’s now five days since the release. My controller reboots daily via a script at 3:30AM and I’ve initiated a few manual reboots as well just to see if that would trigger an upgrade. Alas, no.

Not a problem for me but might suggest some issue in the way the downloads/upgrades are trickled out.

Update is enabled on the Controller/Hub Settings tab via ezlogic.mios.com

It looks like your controller was flagged manually during a troubleshooting process you had with our support team, therefore, it didn’t take the new firmware.
I just set the controller for it to receive the upgrade upon reboot.