Ezlo Plus Self reboot daily

Given the Ezlo software has a ways to go to reach stability I am thinking of rebooting my Ezlo Plus daily. I would do that with a mechanical timer on the power cord and just kill power for 5 minutes at 3:30AM but thought a scene might be easier. My thinking is some of the memory leaks might not show up in 24 hours so I would at least avoid that sort of instability.

I see on Vera there are trheads to do this

some say not to do this if WAN connection is down so they suggest pinging Google before rebooting.

Not sure how I feel about the ping as a faulty ping could be a local problem with Ezlo and not the WAN connection. So if its dependent on a good WAN connection it might not reset when it should.

Anyway wondering what some of you more sophisticated users think.

Well I just tried it and threw caution into the wind.

os.execute(“reboot”) did work as a LUA script under a meshbot.

So it does work. Now wondering if this is a bad idea?

Think the reason why they mentioned maybe checking the WAN connection first, is because the Vera hubs didnt have a real time clock battery and they could lose the correct time, if rebooted when the Internet was down.

Not sure how the Ezlo hubs handle this situation and problem?

You could maybe use the new Ezlo site sensor plugin with 8.8.8.8 and in your Meshbot don’t run your LUA script action to reboot if that site sensor switch device is currently off, likely indicating your Internet is down etc.

In the SSH terminal you can use a “date” command to show what the current time is. I did that and it had the correct time and date showing.

I then as a test blocked Internet access to my Ezlo Plus hub on my router and then rebooted it.

Connected back in to it with SSH and ran the date command again. Now it says the date and time is:

With no access to the Internet and time servers it can’t sync its time currently.

I then pulled the power cord from the back of it instead and then plugged it in again.

The time now says its

I expect over time without an Internet connection, it would drift out of time sync more and more.

I did this with my Vera Lite for years without any problems until it bricked recently. I don’t think that is why it bricked but I am not an advanced user /programmer.

The other concern I have is what would happen if this script runs while the firmware is being updated. I don’t know what day/time the firmware updates and I haven’t seen a way to opt out of automatic updates.

Please update us in a month or two Let us know if you have had any issues.

and I haven’t seen a way to opt out of automatic updates.

No idea if it actually works but in the web UI I remembered there is a setting.

Go to controllers on the menu item then press the function button and select hub settings.

At the bottom there is a toggle for “Update Enable”.

We’ll it’s been 11 days and no ill effects. Just a simple one line lua script. A mesh bot runs it at 3:37AM everyday. I actually added a delay in the mesh bot of 2 minutes. That way when it reboots it is comfortably after the daily trigger time and doesn’t get into an infinite loop.

I doubt it would interfere with a firmware update. Think about it. If Ezlo is Re flashing itself it would be in some admin state not running the usual Ezlo app. So I doubt it is a risk.

I had a WiFi router years ago that had a reboot feature. I’m sure the software purists are cringing but memory leaks and stack overflows are not uncommon in new code. Just a catchall cleanup that occurs behind the scenes.

Ah yes, you are correct.

Do you know if there is a regular fw update schedule or is it just whenever they decide to push one out? Back when I was regularly tweaking my Vera Lite controller there was a page with all the release notes. do they have a page like that for Ezlo? 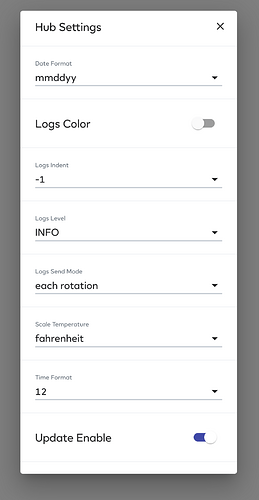 As and when they push an update out it seems.

I am not aware of an official release notes page, just what they post on the forum about a firmware release I think. Might be wrong so dont quote me.

Just turned off updates on one of my Ezlo controllers, will see if it no longer updates?

No idea if it actually works but in the web UI I remembered there is a setting.

Go to controllers on the menu item then press the function button and select hub settings.

At the bottom there is a toggle for “Update Enable”.

Seems this setting does not work. My controller updated to the latest firmware anyway regardless.

“This hub is on the beta testers list. We force FW updates for hubs in this list.”

So your hub should not update if its not enrolled for beta updates.

I’ve had updates turned off on my controller for a while and the current FW is 2.0.30.2041.2 … a little behind yours so I guess that means it disabled updates.

The question now is how do I manually update it? Also it would be nice to know what updates are included in the FW updates to decide if I want to risk updating if my system is mostly working correctly.

The question now is how do I manually update it?

Currently I don’t think you can manually initiate a FW update. If you have updates enabled it just happens as and when they push a new FW release out.

Its not like the old Vera firmware hubs, where the user could choose to update or not and the user also had a website he could go to, to read all the release notes for that new firmware version.

Ezlo hubs and processes are currently lacking in this area compared to the Vera firmware hubs it seems.

Although saying that we are no longer getting any FW updates for Vera firmware hubs as you probably know.