I have four scenes / Meshbot rules that seem to have gotten corrupted and I cannot edit them and I cannot delete them, which is what I want to do now. I have tried in the Vera mobile app to delete them, in the Ezlogic web GUI and even in the Online API Tool and I cannot get rid of them at all.

Doing a hub.scene.list command in the API Tool I can see they are still in the list of results, this one for example:

However when I try to delete it I get this error: “The scene with this id does not exist” 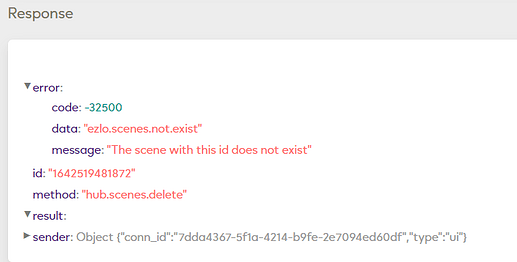 Does anyone know how to fix this issue ???

I will check if something can be done in order to force the removal of those for now while we investigate a little deeper.

I would like to know if perhaps they got corrupted after making some changes or a firmware upgrade or if you can pinpoint what happened prior to them going bad it would be awesome!

Three of them had LUA scripts on their actions. I originally created them in the Vera mobile app when you first released lua scripting on the Ezlo hubs.

Then later they stopped working likely due to changes in the development / architecture etc.

They then got corrupted and I could no longer edit or delete them.

Note for other users Lua scripts are now operational again in Meshbot rules.

And the fourth rule I am having problems with, I’m not sure what happened it was just a regular rule for a lights schedule that is now corrupted.

The names of the problem rules are as follows and they can a be deleted if you can do it.

These scenes / rules are on the Ezlo Plus controller the one with the serial number 90000400.

Got it! that’s good info, at the moment I would need you to enable remote access on that controller and that would be it. (Keep in mind that when you tap the toggle button it will not stay green and visually it will revert back but it will be actually enabled.)

Let me know when that’s done to proceed.

(Keep in mind that when you tap the toggle button it will not stay green and visually it will revert back but it will be actually enabled.)

The scenes were removed, please take a look and let me know if you see the same on your end just to confirm.

How did you remove the scenes? Is it something I can do myself somehow if this happens again?

I have checked and those four rules have now been removed.

Well… yes, you can use the following script made by one of my colleagues but I modified it in order to delete scenes.

You can either SCP that file into your eZLO and then follow the commented instructions in the file or perhaps just create a file in your eZLO through SSH and then just copy and paste the script.

If you have questions about it let me know!

Great thank you I will keep that handy.

Alexey is also looking in to this issue now, I just sent him the storage.bin file he asked for off the controller.

Just tried to use the script to remove a scene but I am seeing this, any ideas?

I am using the _id of the Scene obtained from the Online API Tool.

That’s weird… it does actually have the reserved word there.

OK I enabled it.

Most of the scenes left on this controller I cannot edit or delete. And these were not using LUA scripts in their actions either.

The only difference is that at the end of the code you were missing an “echo” after I typed it in, it started working, I left the script there if you want to check it out and the scene you were trying to remove is no longer there.

Leonardo the script is now working and deleting scenes thanks.

Did you update the script posted into this forum thread also?

If other users want to download and use it etc.

The script I uploaded is ok, perhaps when you copied and pasted it the last reserved word was missing, but I actually downloaded the one uploaded here and it was ok.

If you have more problems with scenes or so let me know.

I am trying to use this script again today, but on a new Ezlo hub and I am getting the same error as before.

I downloaded the script again from this forum post and placed it in to the /tmp dir on the hub etc.

Not sure why this is happening?

Are you able to take a look for me again please ?

Would you mind letting me know the serial number? also, enable remote access.
I will check!

This is the corrupted scene I need to delete