We’ve released a new beta update for Ezlo Linux firmware 2.0.31.2071.4
The highlights of this release are

The new Beta update for Ezlo Linux firmware 2.0.31.2071.4 for Ezlo Plus and Ezlo Secure controllers contains:

[System issue] Restart services with an exception(St13runtime_error): Can not connect to spread

Just had a terrible firmware upgrade experience, my Ezlo Plus controller went offline for about 30 minutes and I thought it was bricked. It seemed to get stuck in a boot loop.

I could ping it sporadically, but it was up and down, pinging and then timing out etc.

I could sometimes connect to the SSH terminal other times not.

All the time in the Vera mobile app and web UI it showed as OFFLINE.

This went on for about 20 minutes.

I then gave up looking at it and had some lunch and when I came back to it, it was a solid Blue light and ONLINE again by some miracle.

I really thought it was bricked for that period of time.

My other second spare Ezlo Plus hub seems to have also updated without any issues or none that I saw and witnessed.

How do you get a hub to upgrade to a beta release? I know production releases are automatic.

Your controller serial number has to be enrolled for betas I think. Cant remember how, there was an old thread about it somewhere.

There seems to be something wrong with the “Date and Time / Days of the Week” trigger. If I create a MeshBot with it and uncheck “Choose the moment of day activation will occur”, save the MeshBot and then edit it, the checkmark is checked again: 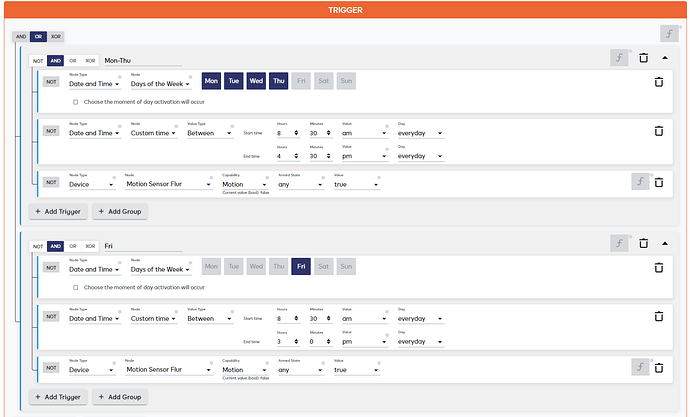 The MeshBot seems to be saved correctly but the checkmark is checked automatically if you edit the MeshBot.

Thank you for the report @Odysee ,

I’ll try to replicate and report to the team for further review.