Anyone good at electrical wiring for light switches?

I ordered a Fibaro Dimmer 2 and Bypass device for my upstairs landing / hallway lights.

I have 2 light switches one at the bottom of the stairs and another one upstairs on the landing.

I have no neutral wires in the house behind the light switches. This is UK wiring in a 70s house.

These are photos of the light switch downstairs. 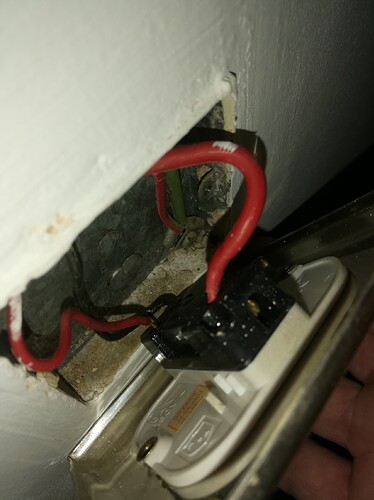 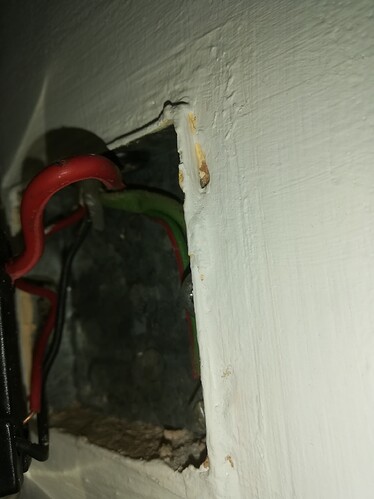 This is the upstairs light switch and I think it is this one that is wired to the ceiling light?

The wiring looks the same at the other switch, there is a red and black cable at the bottom of the switch and a red cable at the top of it. There is also a red / green cable and a green cable going to an earthing point on the metal back box. 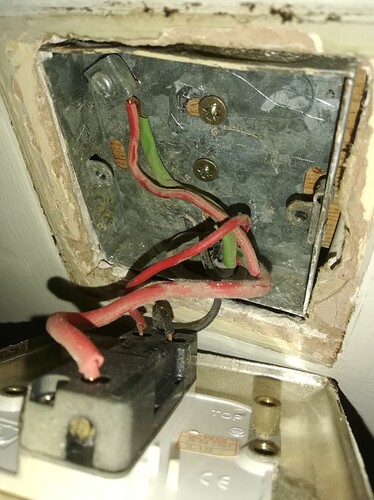 I have wired in lots of Dimmer 2 modules before but never when there was a 2-Way light switches setup.

There are these guides on Vesternet.

This application note looks at how a Fibaro Dimmer 2 module can be installed to control a standard 2-Way lighting system.

This application note looks at how a Fibaro Dimmer 2 module can be installed to control a 2-Way lighting system.

I planned to use my regular 3 position retractive / momentary switches, but maybe I need to use more normal latching switches for this?

But I am really not sure, any advice on how to do this?

Electrical wiring in the United Kingdom

Electrical wiring in the United Kingdom is commonly understood to be an electrical installation for operation by end users within domestic, commercial, industrial, and other buildings, and also in special installations and locations, such as marinas or caravan parks. It does not normally cover the transmission or distribution of electricity to them. Installations are distinguished by a number of criteria, such as voltage (high, low, extra low), phase (single or three-phase), nature of electric...

Red and green cables look like the Pre-1977 IEE colour coding. But then protective earth (green) and phase (red) would cause a short circuit

Could be a mix of different decades. The red and green cables that are clamped together seems to be protective earth as they are clamped to the metal housing. You can only measure the rest to be sure.

I don’t know the wiring seems strange to me, I can’t even really see the wire that would go up to the light on the ceiling.

As best as I can tell the current wiring is something like this. Although there are some wires I don’t know where they go / come from ?

I found the wires on the upstairs switch that go up to the light bulb. I actually tested those two wires for continuity with a multi meter. 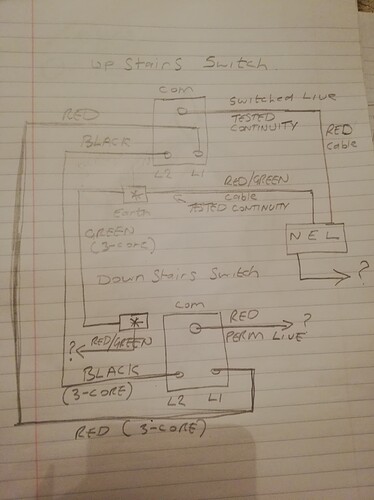 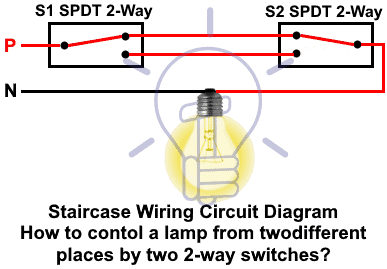 My diagram doesn’t look or seem right at all. Unless there are connections in the wall or ceiling I cannot see.

I will bell out all the cables tomorrow and try and work out what connects to what.

I knew trying to do this would be a headache.

That diagram I drew yesterday is actually correct, which is surprising as I guessed half of it.

Anyway using a long cable from upstairs to downstairs I have just bellled out all the wires with the multi meter for continuity.

I drew the diagram again which is below.

There is no permanent Live at the upstairs switch it seems, after testing with an electricians screw driver that lights up.

Which I think might be a problem, as I think the Fibaro Dimmer 2 module needs to be installed in a position that has permanent live and also the wires going up to the light bulb.

Any suggestions? Someone must have done this with similar 70s style house wiring.

It’s typical for the 2-switch setup we use in The Netherlands. In these links you’ll find a wiring setup with a figaro dimmer for this kind of wiring:

This application note looks at how a Fibaro Dimmer 2 module can be installed to control a 2-Way lighting system.

Yes that does seem to be the same wiring I have. 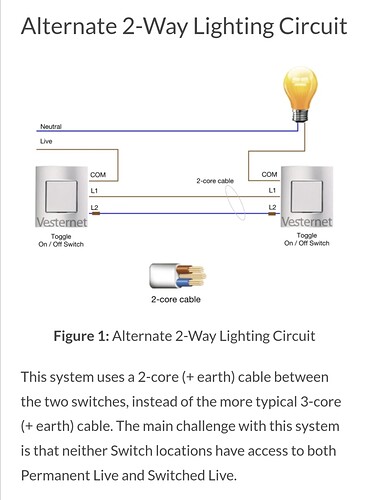 I’ll read that article again, see if I can figure it out.

OK I’ve read that article again and I don’t like any of the options, as it requires adding a new wire between the switches which isn’t going to be possible or re-wiring the live to the other upstairs switch also probably not possible.

Or maybe using two Dimmer 2 modules one for each switch as show in the last example on the article, which is more cost.

Don’t understand this diagram how does Dimmer module A get any live power ? 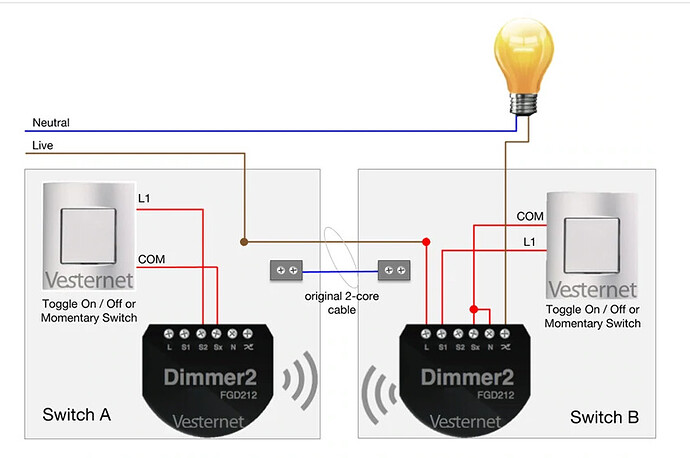 So I am wondering if I can cheat and if this would be safe to do so?

This is from the user guide for:- 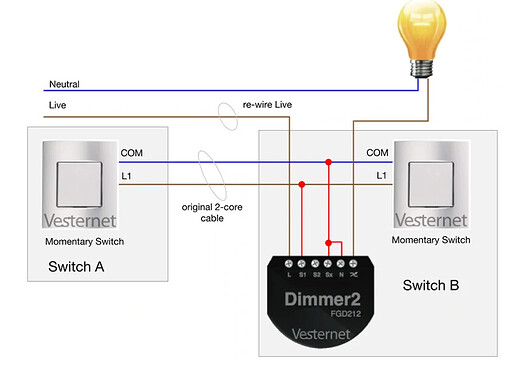 I am wondering if I can do this instead, pinching a perm live from the plug socket to feed the Fibaro module and using a junction box or some kind of inline fused spur etc.

EDIT: DO NOT DO THIS BAD IDEA 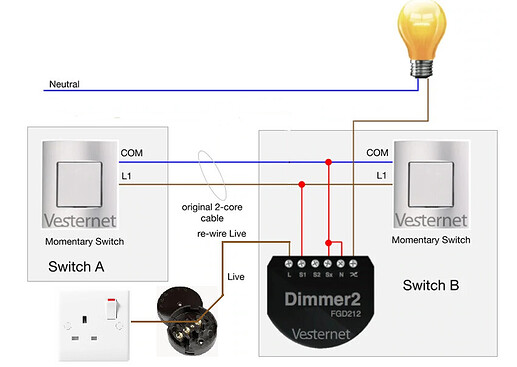 The original perm Live located at switch A would be not then used and terminated.

Or thinking about it, the ceiling pull cord switch for the bathroom lights is just the other side of the same stud partition wall where the upstairs landing light wall switch is.

Maybe I can just pinch a permanent live from that and drop it down inside the wall to where the wall light switch is.

Not sure yet if it would work, but you have to make sure that neutral and live are coming from the same fuse. Are you sure this is the case for what your trying to do?

I asked my friend who is a sparky and a Fibaro installer he said.

“You cannot pinch the live from sockets because it is rated differently and you will be merging 2 circuits of different ratings and RCD’s will trip.”

I’m asking if I can pinch a perm Live from the bathroom ceiling lights instead?

The important bit is to use it from the same circuit. You can never mix those.

The wiring in my house is acient including the consumer unit.

Hi CW,
Your Leccy mate is right, mixing circuits is not a good idea. The lighting would be on a power circuit, probably 30A, instead of typically 5A for a lighting circuit.
Does not sound like you have RCDs, but mixing would cause problems in future if you upgrade the Consumer Unit. (I put separate MCBOs on my consumer unit, and the landing light tripped the circuits every time. I found that the Downstairs switch was taking Live from the Downstairs circuit, but the light was using Neutral from the Upstairs circuit. So turning on the light meant that the there were different Live and Neutral currents in each circuit and the so MCBOs would trip).
Repurposing the wires as in your post should be fine, your Live lighting would all be off the Light MCB, and you probably have a single common Neutral bar.

Octoplayer (not a qualified Electrician, but Fellow of Inst of Physics)

Success, I’ve actually done the wiring today rather than just thinking about it

So I followed this diagram instead today. 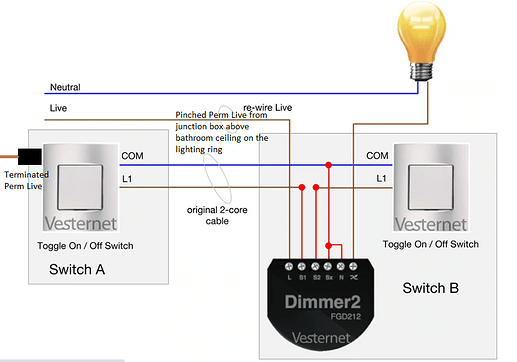 The following parameters need to be set:

Now both light switches work to turn on / off the light.

I also had to force a calibration for the bypass device as before I did this, the lights would turn on and then turn themselves off again. That is done using parameter 13.

So pretty happy its working now, as without pinching that perm live from the junction box above the bathroom ceiling from the lighting ring there, this would not have been possible without running an extra new wire between the two switches.

My sparky friend did say “Taking it from a lighting circuit is fine”.

As it was I could just drop down a new short wire from the bathroom ceiling in the loft down the stud partition wall to the upstairs hallway light switch for the new perm Live to run the Fibaro Dimmer 2 module.