Alexa Can Tell You When Your Door is Open

Just when I think Google Home has won me over, Amazon takes a huge leap forward. Alexa and SmartThings/abode Sensors Alexa now supports SmartThings and abode motion and contact sensors. While you c…

For the moment this feature is not available in the Vera skill for Amazon Alexa.
This is something that will be added in one of the next updates.

thanks for the input HelloVN. I googled your suggestions. Both options seems to require a Raspberry Pi or a 24/7 home pc and programming skills to write a script without a user friendly interface. it will be awesome though if it works.

Will this bypass the vera or is this in addition to the vera setup? If it still has the vera, how will vera communicate with the OpenHab or Home Assistant?

[quote=“bogdanf, post:2, topic:199970”]For the moment this feature is not available in the Vera skill for Amazon Alexa.
This is something that will be added in one of the next updates.[/quote]

Looking forward to this, thanks.

Was thinking of making a virtual switch in vera that corresponds to my door status then that will be the trigger for alexa to make an announcement. However, sad to see that amazon doesn’t recognize any of my vera connected devices as a supported device for the routines. (my vera connected lights, plugs and locks are listed in amazon alexa devices but not working as trigger in routines)

[quote=“hellovn, post:3, topic:199970”]OpenHab or Home Assistant could send a custom message to any Echos. You can install the open source app and use vera to send the custom message through HTTP requests.

thanks for the input HelloVN. I googled your suggestions. Both options seems to require a Raspberry Pi or a 24/7 home pc and programming skills to write a script without a user friendly interface. it will be awesome though if it works.

Will this bypass the vera or is this in addition to the vera setup? If it still has the vera, how will vera communicate with the OpenHab or Home Assistant?[/quote]

I installed OpenHab2 on a Raspberry PI 3. After that, I installed the Alexa plugin for OpenHab. When I have a trigger in Vera, I send an HTTP request to OpenHab to say a custom message to an Alexa device. It works great.

hellovn, do you need to create an amazon account for this? I’m currently playing around with renoTTS as it has soap based messaging similar to veras. So far I haven’t been able to get it to work though. There is also PollyTTS that is written as an openhab plugin. Are you using either of these to get your TTS to echo working. What’s involved in creating the service?

This had better be added and soon. It is a game changer. A better integration of Alexa services that can actually react to non-verbal commands. Smartthings now has a way to run routines from the hub. Incredible, a feature I wanted the first day I bought my Echo. It’s a big deal and I can’t believe more people have not chimed in.

So Vera please listen, your competitor has it and I want it too. I don’t plan on waiting 6 months or more for this feature. The original post is already month old. Personally, I don’t want to hear about some work around. Another learning curve that I don’t have time for. I want a mature system that doesn’t require ducktape and glue. I’m a hobbyist myself and that’s why I have Vera. I love programming. I love DIY hardware. But enough is enough. It took longer than expected to get Philips Hue up and running when other systems were good to go. And what about IFTTT? Another thing already available elsewhere that Vera has not followed through with. I got it, Samsung has deep pockets and more resources. But your playing in the same sandbox with them and you have got to keep up. Your company will not survive if it continues to lag behind.

This is not easy to do based on my reading of the struggles in openHAB to get it working. See the almost 1200 replies to this thread: https://community.openhab.org/t/released-openhab2-amazon-echo-control-binding-controlling-alexa-from-openhab2/37844

I don’t think that Amazon is officially opening this up. It appears to be that some have figured out how to make it work based on existing protocols that weren’t expressly designed for it. Nonetheless it does seem that Michael has it working reasonably well for openHAB. I tried an earlier version which did work for a few days, then hit the login problem that many others ran into. Michael’s latest supposedly solves this. But it’s only good until Amazon changes their API’s again and then it may stop…

Here are some example phrases:

?Alexa, is my front door open?"

?Alexa, is my bedroom window open??

Alexa can also perform actions when motion is detected or a door/window opens or closes, such as a custom Alexa notification or playing music. Click here to learn more about creating Routines in the Alexa app.[/i]

In fact, it looks like it has been up and going since August. No work around. No additional equipment. No huge learning curve.

It is only a matter of time before Amazon let’s skills be run by routines. When that happens, I’ll have no reason to stay with Vera. It’s not just about this feature, but will rather be a signal to me that Mios can no longer keep pace with new features offered by connected technologies. I’ll hold out til January, but will move on it not implemented by then.

Yes, you are right. That’s the Alexa V3 smart home. I was thinking of the Alexa control which is an entirely different beast: plays specific music or arbitrary TTS or any other function directly on the Echo from your automation. The latter is what I want, although the V3 smart home is also very nice and should definitely be added. openHAB does not have that yet, but it’s being worked on from what I read. 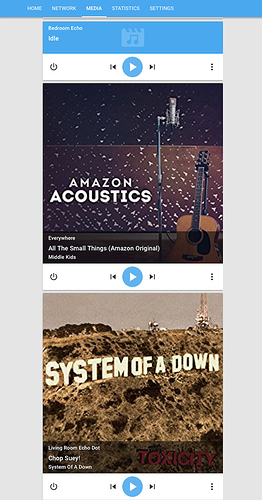 I’m excited to share with you all a component that I have been working on for the last week that allows controlling amazon echo devices (and clones) directly in home assistant! 🙂 What This Is: This topic and this post is a place I hope to use to...

There’s a thread here somewhere on using a raspberry pi with vera to play sounds using luua code in a scene.

I tried that but it slowed the scene down too much.

I ended up using Home Assistant to perform the action… I’ll dig it up and post it all later, but basically, I point HA to the vera and when a door opens the HA sees that and runs its process and plays a MP3 file. I used a text to speech generator and made MP3s for all the doors. So when a door, window, or gate is opened I hear a female with British accent say “Upper Gate Open” or “Front Door Open”
@ 11pm it scans for open doors/windows and announces “Warning, the basement door remains open”

I also have it check the gate sensors to see if a gate has been left open and if so will announce “Warning, the upper gate remains open, the dogs are escaping” on a 60 second interval.

hellovn, do you need to create an amazon account for this? I’m currently playing around with renoTTS as it has soap based messaging similar to veras. So far I haven’t been able to get it to work though. There is also PollyTTS that is written as an openhab plugin. Are you using either of these to get your TTS to echo working. What’s involved in creating the service?

Sorry, did not you see your question. I did not have to create any Amazon account. After you installed Open Hab or Home Assistant in your Raspberry Pi, you can install the alexa binding for those open sources. For Open Hab, I use this to play the custom message and it is very fast:

There’s a clever openHAB routine here that takes in a command on the Echo and then responds appropriately with the status. This example asks “Dryer Status” and then Alexa responds with the status of the dryer with TTS on it. Hi all, I thought I would share this solution was inspired after conversing with other members in this thread. I have multiple echo devices in this exampler I show two. A routine name is spoken to a echo device and the OH rule will process that...

Get it together Vera. When someone rings my Ring Doorbell Alexa says ?Someone is at the front door?

Yes, we need this. Announcing is powerful in home automation!

Yes, we need this. Announcing is powerful in home automation!

Alexa will only announce two types of device actions in an Alexa routine, motion or a door/window trigger device (at this tinme). Vera does not include these type of devices for Alexa. To see this, go to “Manage Alexa” in your Vera controllers manaagement, and the devices do not include any motion or door sensors. Any sensor type defined as a motion or door/window trigger can be used to trigger a custom Alexa announcement routine.

I wanted to get this feature added to my home Auto system some time before I get old and die waiting for Vera to do it, so I got an ISY 994i and wow, 30 minutes later it was a go! The nice thing about ISY is that you can make ANY device, a switch etc., a motion type “sensor” that Alexa will respond to.

Some time ago, someone developed a way to include VSwitchs in the Alexa devise list. If that same approch was applied to motion and door sensors, life would be good with Vera/Alexa users.

Life with Vera has been like a bad marriage. You can keep hanging on for all the wrong reasons, but in the end, divorce may be the final solution to be happy again. I have a large investment with Vera. Four devices, 4,873 lines of custom code (sorry, I don’t use Apps), and like a marrage, alot of time.

So, when Vera says they are going to add it in the future, like in a marriage, WHEN!

Vera, I am cheating on you with ISY. If you want keep this marriage intact, do your part!