Someone else on the forum mentioned this a few weeks ago and that it wasn’t working for him either.

I am trying to replace a failed device today and under this failed devices Advanced - Commands tab and pressing the Replace Failed button, it just pops up a dialogue box saying Success - Command executed successfully.

However nothing then happens. What is meant to happen ? 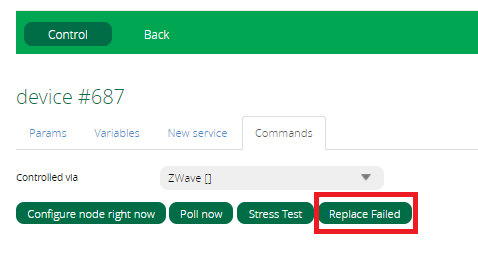 Hi Leonardo. are the Vera support team aware of this problem with the “Replace Failed” function?

I just know never to click that “Configure Node Now” button. OMFG. Ask me how I learned that little chestnut! Spent the day re-adding a kitchen’s worth of RGBW components to Vera, lol.

The condition is that the device that is replacing needs to be the exact same model and product number.

Note that once you press on “Replace failed” the next step is to do the pairing procedure on the new device.

I see that a ticket was already reopened for this matter, the Ezlo team is looking into it and a fix might be release for the 7.32.

needs to be the exact same model and product number

I believe they were the same yes. I was not taken to the pairing screen / wizard after pressing the “Replace Failed” button.

I have manually added the new device now and manually removed the old one.

Yes, this functionality has been broken for several firmwares now. It doesn’t matter if the device is an exact match, it always just adds a new device.

I didn’t even get that far.