Meshbot's / Ezlo system how to tell if its "Night" or "Day"? 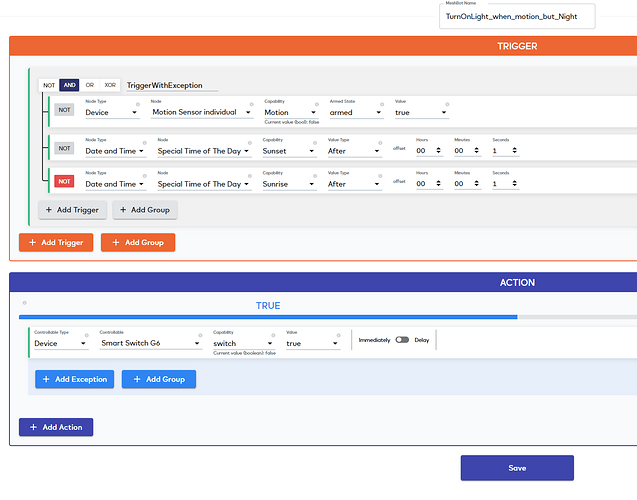 All I am doing in MSR really is selecting a reference rule in my other rules and asking is it currently True? aka is it Night.

Saves me having to add into each rule more stuff like groups and sunset or whatever, to work out if its night or not.

And with the Vera Day or Night plugin it was even easier, as that is a Switch device.

So in the rules you would just add a constraint that the Day or Night Switch is currently 0 aka Night.

OK I created this rule, will see if it works and I will disable my current MSR rule.

Actions - Turns on the light and then after a 30 sec delay turns it off again.

You have a typo in your “NOT” time rule - it has to be NOT after Sunrise - currently you have Sunset on both. I’m surprised you could save that one

I’m surprised you could save that one

Well spotted yes I made a mistake there. I will correct it now.

LOL after all that now the motion sensor in question says “Can’t detect device” in the Vera mobile app.

It’s dark here now and I just went to test the rule by going in to the porch room and the light didn’t turn on.

Looked in the Vera app and it says it cant detect the motion sensor.

Its a Centralite Zigbee motion sensor, they like to just stop working after a period of time for no apparent reason.

I took the battery out (which is new) and back in again, but its still offline. 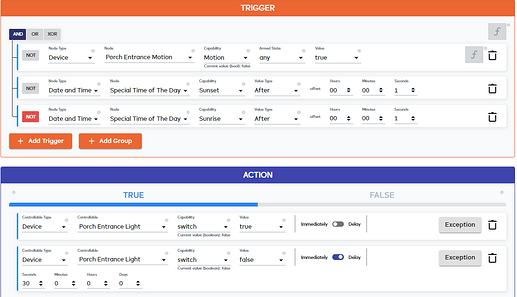 I rebooted the controller and now the motion sensor is online again.

The other three Zigbee devices are still offline however, might have to remove and insert again their batteries.

Any how the motion sensor I can see does now trip in the Vera mobile app when I walk in to the porch, however the light is NOT turned ON at all.

The motion sensor after a period of time does then un-trip itself OK in the Vera mobile app.

If I manually press the Play button next to the rule to force run its actions, then the light is turned ON and then OFF again after the 30 seconds delay. So the actions are correct.

So something not right with these triggers / conditions it seems.

EDIT: Just removed the battery and inserted it again on the none related to this rule Centralite Door sensor and now that device is online again. I don’t know why this happens with these Centralite Zigbee devices but its not the first time this has happened.

Does not work, light is not turned on:

Does not work, light is not turned on:

Does work and the light is turned on:

I then tried the other way of maybe doing this using a reference rule.

This doesn’t work either.

So will have to enable my MSR rule again for now. One of the devs is going to test these trigger combinations for me.

Building up references makes later logic less complicated. In PLEG I create exported conditions that other PLEGs can read and reference in logic. All the lighting in my house references “Quiet Time”, which is calculated by my Security PLEG based on security system alarm state + motion sensor data - trying to determine if the humans are asleep, while trying to ignore pet motion. During Quiet Time we don’t want lights to automatically come on and wake the humans. Not something easily calculated for each and every lighting device - much easier to calculate in a central location and pass down.

I wasn’t questioning that you and your team understand the value of references related to programming! I wanted to reinforce the value of making it so your users can create their own references. So not for users that just want remote control - for users that want real automation without constant human input.

Agreed…
and we have that ability already!

I can’t get this night scene working either. Seems to be a problem with the after sunset condition. Once you add that trigger in nothing works. Hope the devs get this fixed quickly.